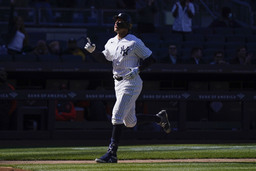 Judge also had a tying hit and Anthony Rizzo delivered a go-ahead single during New York's four-run fifth, when all the runs were unearned.

"Whenever you get extra outs in a baseball game, you always want to cash in on those," Rizzo said.

Marwin Gonzalez had an RBI double, and Judge hit his single off Baltimore starter Bruce Zimmermann (1-1).

Giancarlo Stanton added an RBI single as the Yankees won their sixth straight and for the eighth time in nine games. New York also won its seventh straight home game and became the first AL team with 13 wins.

"It's a really focused group and to see them really start to play well and get results and play well in the collective - pitching, defense, offensively, running the bases," manager Aaron Boone said. "I feel like everything's kind of contributed and everyone on the roster is contributing."

The Yankees scored double-digit runs for the third time in four games. They did not score more than six runs through their first 15 games.

Judge tied it with a hard single that deflected off second baseman Rougned Odor's glove to center field. Judge's hit occurred after Mateo let LeMahieu's grounder deflect off his glove.

"We got some help today with some misplays," Boone said.

"I just think you got to take advantage when you see that," Locastro said. "Today everybody in the lineup was able to get a hit and we were able to score a lot of runs."

Josh Donaldson padded the lead with an RBI single in the seventh.

Rizzo, who homered three times Tuesday, gave the Yankees a 3-2 lead by dropping a single in front of left fielder Austin Hays.

Gutierrez hit an RBI single and Trey Mancini had an RBI groundout in the third for the Orioles, who dropped their fourth straight.

Baltimore committed its most errors since also making five at Tampa Bay on Aug. 8, 2018. The Orioles also committed five errors against the Yankees in the Bronx for the first time since June 8, 1952.

"We didn't play very good defense today and we had a tough time covering up for it offensively right now, too," Orioles manager Brandon Hyde said. "We've got to be better."

Hays had four hits, including an RBI double in the ninth.

Zimmermann was charged with four unearned runs and allowed five hits in 4 1/3 innings.

Miguel Castro (2-0) escaped a bases-loaded jam in the fifth. Jonathan Loaisiga stranded two in the sixth and tossed 1 1/3 innings before the Yankees pulled away.

Rookie Ronald Marinaccio allowed doubles to Hays and Odor before giving up an RBI single to Ryan McKenna in the ninth.

Orioles: INF Ryan Mountcastle (stiff neck) was held out of the lineup for the second straight game and is day-to-day. ... C Anthony Bemboom had his left middle finger bloodied during the second inning and got it taped up.

Yankees: OF Aaron Hicks (paternity list) is expected to be activated Friday.

Orioles: Baltimore did not announce a starting pitcher for the opener of a three-game series at home against Boston. LHP Rich Hill (0-1, 4.85 ERA) will start for the Red Sox.