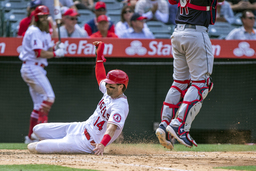 ANAHEIM, Calif. (AP) The Los Angeles Angels haven't won a playoff game in over 12 years, and they haven't finished with a winning record since 2015.

With a five-game winning streak and a wealth of confident players across their roster, the Halos are starting to believe this year will be different, even though it's not yet May.

Taylor Ward drove in two runs, Brandon Marsh had three hits and an RBI, and the Angels completed a four-game sweep of the Cleveland Guardians with a 4-1 victory on Thursday.

Detmers (1-1) pitched five innings of two-hit ball to earn his second career major-league victory for the Angels, while Ward and Marsh hit RBI singles in the third inning of Los Angeles' 12th win in 16 games.

The Halos are six games over .500 for the first time since late June 2018. That's no small achievement for a franchise that has wasted incredible years from Mike Trout and Shohei Ohtani during its seven-year playoff drought.

Orange County native Austin Hedges homered and had two hits for the Guardians, who have lost the first seven games of their 10-game road trip. Cleveland scored only seven runs in four games against Los Angeles, with five of those coming in Wednesday's blowout loss.

"It's definitely not fun," outfielder Myles Straw said. "None of us want to be going through this, but it's a weird sport. I think we're going to come around, come together and be just fine."

Detmers put together another strong start befitting one of the top left-handed prospects in baseball, walking one and striking out four.

Los Angeles' hot start to the season is largely due to stellar work by its long-struggling rotation, capped by this four-game series with the starters allowing just three runs in 23 innings. The Angels' bullpen is also much improved: Four relievers combined for four innings of scoreless two-hit ball, with Raisel Iglesias pitching the ninth for his fifth save.

"I don't know about the last three games, but they certainly held us down (today)," Cleveland manager Terry Francona said. "We hit some balls right at people, and we're going to have to continue to do that, to have those at-bats."

Cal Quantrill (1-1) yielded four hits and one earned run over six solid innings for the Guardians, striking out four and walking three.

Los Angeles loaded the bases on a walk and two errors to open the third. Ward and Marsh delivered short RBI singles before the Angels went up 3-0 on Trout's double-play groundout.

Hedges delivered a two-out solo shot in the fifth, but Detmers finished the inning with his 88th pitch.

Los Angeles added a run in the seventh when Tyler Wade doubled and scored on Ward's groundout.

Ward drove in nine runs in the four-game series, an impressive RBI surge that's coincided with his move to the Angels' leadoff spot in place of Ohtani. The AL MVP got his first day off of the season Thursday after playing both ways Wednesday night.

Guardians: Rookie OF Steven Kwan missed the four-game series with hamstring tightness, but still could avoid a stint on the injured list. He'll be re-evaluated in Oakland on Friday.

Angels: David Fletcher is close to returning from his 15-game absence with a strained left hip. He is with the team and doing on-field work.

Guardians: Aaron Civale (0-2, 9.58 ERA) is scheduled to take the mound Friday for the opener of a weekend series at Oakland. He has yielded 11 earned runs and hasn't reached the fifth inning in three starts this season.