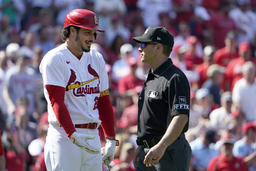 Mets hitter J.D. Davis left in the top of the eighth inning after being hit in the left foot by a pitch from Genesis Cabrera, the major league-leading 19th hit-by-pitch for the Mets this season - including three Tuesday night against St. Louis.

New York appeared to retaliate a half-inning later against Arenado, who reached four times and drove in three runs. Lopez zipped a 94 mph fastball near his head, and Arenado began yelling for Lopez to "do it again." The benches and bullpens cleared, and the teams pushed and shoved near home plate.

"I went a little bit inside, that's part of the game," Lopez said via an interpreter. "That one kind of got away from me."

"When you come up top like that and jeopardize someone's career and life, yeah, I take exception to that," Marmol said. "And I don't think anyone in the big leagues appreciates getting thrown up top."

Cardinals first base coach Stubby Clapp seemed to tackle Mets star Pete Alonso near the center of the melee. Cardinals veteran Adam Wainwright later walked over to Alonso to ask if he was all right.

"Actually, Genesis Cabrera grabbed me by the back of the collar and then then he just ripped down and then the coach just kind of jumped on me and I thought that was kind of cheap going from behind," Alonso said. "I mean, if you want to hold me back, if you want to restrain me, go at me like a man."

Clapp was ejected along with Arenado, but Lopez remained in the game.

"I did not believe the pitch was intentional, and both of them, I didn't see any actions that would result in ejection," Wegner said, referring to why he did not eject Lopez or Alonso. "But we're going to watch the videos and write up a report and Major League Baseball will look at it all and see if they see something that we didn't see."

Lopez was high-fived by several teammates when he returned to the dugout after the inning, including Alonso, who was hit by a pitch in the head Tuesday.

"From what I understood, I knew he was uncomfortable from that pitch and he got upset," Lopez said of Arenado. "At that point, I was happy with that because I knew I got him out of his comfort zone. They took him out of the game because of it."

Mets manager Buck Showalter denied after the game that New York felt the need to send a message about the plunkings and said Lopez's pitch wasn't intentional.

"I'll let them handle their players," Showalter said after being asked if Arenado was out of line. "I know, our player got hit in the head and went to first base," referring to Alonso's plunking the night before.

The Mets have been furious by a spate of hit batters, and pitcher Chris Bassitt blamed it largely on inconsistencies in baseballs provided by the league a year after Major League Baseball cracked down on the use of illegal sticky substances by pitchers.

"MLB is always concerned about keeping hitters safe from dangerous pitches," a league spokesman said in a statement Wednesday. "We closely analyze trends in the game and have active conversations with our players and coaches to address concerns.

"Through April 26, leaguewide statistics show hit-by-pitch rates and wild pitch rates are down relative to previous seasons. However, one club has been hit more than twice as often as the league average so far in 2022, which is something we will continue to monitor."

Arenado said he had an issue with the location of the pitch rather than being thrown at.

"I'm not saying he's trying to throw it up there," Arenado said. "It's just the ball got away, but that's the problem with that stuff, you know. It's an unfortunate part of the game, but it is part of the game."

Dylan Carlson's two-run triple capped a five-run fourth inning. The Cardinals scored two more runs during the outburst than they had the previous three games combined.

Mets starter Carlos Carrasco (1-1) gave up a season-high eight runs, seven earned, in a season-low 3 2/3 innings as the Mets had their three-game winning streak snapped.

Cardinals: RHP Jordan Hicks had a right wrist contusion examined. Hicks left Tuesday's game in the third inning after being struck on the right wrist by Dominic Smith's line drive in the second.

Mets: RHP Tylor Megill (3-0, 2.35 ERA) will kick off a six-game homestand Friday night with the first of three against the Phillies and RHP Aaron Nola (1-2, 3.74 ERA). New York has won each of Megill's last four starts, a career high.

Cardinals: RHP Dakota Hudson (1-1, 3.95 ERA) starts the first of a four-game series Thursday night against the Arizona Diamondbacks and RHP Humberto Castellanos (1-0, 3.00 ERA). Hudson threw 6 2/3 scoreless innings in his last start Saturday in a 5-0 win over the Cincinnati Reds.