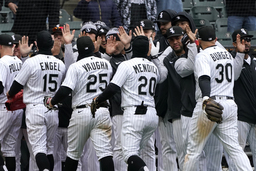 CHICAGO (AP) Andrew Vaughn hit a tiebreaking three-run homer in the seventh inning, and the Chicago White Sox stopped an eight-game slide with a 7-3 victory over the Kansas City Royals on Wednesday.

The winning rally for the White Sox started when Danny Mendick and Tim Anderson hit consecutive two-out singles off Collin Snider (2-1). Scott Barlow then came in, and Vaughn drove his first pitch into the home bullpen in left for his fourth homer.

"I was just up there looking for a good pitch and I got a fastball middle-up and put a good swing on it," Vaughn said. "This is definitely something to build off."

The White Sox added another run in the eighth when Leury Garcia scampered home on Reese McGuire's double-play grounder.

Jake Burger hit a solo homer as Chicago got its first win since April 16. Burger finished with three hits, and Vaughn had four RBIs.

"Hopefully this is the start of a run on the right side of things," Burger said. "The vibes in the dugout were pretty great."

Manager Mike Matheny admired Greinke's grit on the chilly afternoon, with the start time moved up to avoid the cold temperatures forecasted for Wednesday night.

"He did such a good job in there in the second and the third limiting the damage," he said. "Locating well despite the elements. I thought it was a terrific job of pitching."

The Royals trailed 3-0 after five, but Merrifield hit a tying sacrifice fly off Bennett Sousa (1-0) in the top half of the seventh.

Chicago also ended a streak of nine straight games with a defensive error.

Edward Olivares began the sixth with an infield single for Kansas City's first hit of the game.

Sousa got his first major league win. Kendall Graveman struck out four in two innings to earn his first save of the season.

Chicago closer Liam Hendriks said he might have overdone it during last weekend's series in Minnesota. The right-hander experienced back soreness during a 16-pitch outing Saturday, then returned to throw 30 in the final 1 1/3 innings of Sunday's loss that ended with Byron Buxton's booming home run.

"If you're going to give up a walk-off homer it might as well be the longest in history," Hendriks said with a smile Wednesday morning.

Royals: INF Adalberto Mondesi was scheduled to be evaluated further, a day after leaving the series opener with left knee discomfort. Matheny said the initial examination did not indicate a need for a stint on the injury list.

White Sox: 3B Yoan Moncada (right oblique) and RHP Joe Kelly (biceps) are scheduled to begin rehab assignments Friday at Triple-A Charlotte. There is no timetable for either player to return to the lineup. . C Yasmani Grandal was the designated hitter a day after leaving in the seventh with leg soreness.