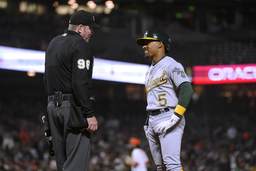 Rodon (3-0) allowed three hits and one run, which raised his ERA from 1.06 to 1.17. The left-hander walked two and broke Tim Lincecum's franchise record for most strikeouts through a pitcher's first four starts with the team with 38. Lincecum had 35 Ks in 2009.

"It's only four games, there's a lot more left," Rodon said. "There's room to improve as far as secondary (pitches). Luckily we've been riding on that fastball and that fastball's gotten me through these first four starts."

The Giants' prized offseason acquisition, Rodon pitched out of jams in the first and fourth, and worked around Sheldon Neuse's RBI single in the third to remain unbeaten with his new club.

"Carlos set the tone," Giants manager Gabe Kapler said. "Came out throwing strikes and even when the A's put high quality at-bats on him, he continued to attack the strike zone. He was crisp right out of the gates."

Flores had five RBIs in 10 games during San Francisco's 11-game road trip then nearly matched that in his first two at-bats against Oakland. The Giants designated hitter had an RBI double off A's starter Daulton Jefferies in the second after Brandon Crawford's leadoff walk, then hit a three-run drive in the third to put the Giants ahead 5-1.

"Since spring training I've been feeling great at the plate physically," Flores said. "It's fun when you get the results that you want."

Slater flew out as a pinch-hitter in the fifth then hit a three-run drive off Jacob Lemoine in the seventh.

Seth Brown had a pinch-hit RBI double for Oakland. The A's have lost four of six.

The Giants have won six of the last eight games in the Bay Bridge Series. ... The A's have committed an error in seven straight games, their longest stretch since 2017. ... Jefferies had allowed three earned runs in his previous three starts combined. . San Francisco first baseman Brandon Belt had two hits. ... Oakland reliever A.J. Puk pitched two scoreless innings in his second appearance since coming off the COVID-19 list. ... The Giants acquired infielder Kevin Padlo from the Mariners in exchange for cash considerations. Padlo was assigned to Triple-A Sacramento.

Athletics: 3B Kevin Smith went through a full infield workout before the game and may begin a rehab assignment soon.

Giants: RHP Zack Littell was placed on the COVID-19 list. RHP Kervin Castro was called up from Sacramento.

Athletics RHP Paul Blackburn (2-0, 1.80) faces San Francisco on Tuesday for the first time since beating the Giants in 2017. LHP Sam Long (0-0, 0.00) will open for San Francisco in his third start of the season.