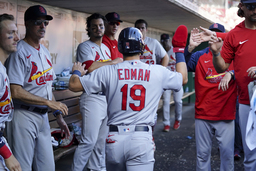 Hudson (1-1) entered the game with a 7.71 ERA, but had little trouble with Cincinnati's hitters, limiting them to two hits while striking out four and walking four. He left with two outs in the seventh after walking Kyle Farmer with his 92nd pitch. St. Louis relievers Andre Pallante and Kodi Whitley finished the shutout.

"We've seen him (Hudson) before," Reds manager David Bell said. " He had a really good sinker today. We couldn't get underneath it. He got a lot of ground balls. ... We did try to hit and run today. With the matchup with Hudson, we knew it was going to be tough to get the ball in the air."

Hudson got former Cardinal Tommy Pham to ground into a double play to end the first inning, and another in the fourth.

"I felt good from the start," said Hudson, who collected his first win as a starter since 2020 because of Tommy John surgery. "A couple misses, but once I got that first ground ball, though, I got a little more confident in what I was doing out there. I got rolling from there."

Right-hander Tyler Mahle (1-2) took the loss for Cincinnati, which hasn't held a lead through the end of a full inning since a 6-3 win at Atlanta on April 10.

Mahle allowed an RBI single to catcher Andrew Knizer in the second, and left in the fifth with two on and one out in the fifth. He was charged with two runs and five hits, all singles.

"I threw too many pitches," Mahle said. "Maybe not throwing the right pitches and getting ahead of guys. That drove up my pitch count."

Goldschmidt pushed the St. Louis lead to 4-0 when he drove home two with a double off the wall in left-center off Lucas Sims. The veteran first baseman also drove in a pair in the Cardinals' 4-2 win in the opening game of the series.

Tommy Edman singled in another run in the eighth.

When the Reds did get runners on, they tried to be aggressive on the bases - but like many things during the losing streak, it just didn't go their way. Farmer was hit by a pitch in the second and was thrown out trying to steal. In the third, Alejo Lopez walked but was nailed trying to take third on a hard base hit to center by Garcia.

"We a lot of competitive guys who care a lot," Bell said. "We got beat today. There is nothing good about it. We continue to be tested. We have to come out tomorrow and focus."

Future Hall of Famer Albert Pujols, who returned to the Cardinals this year at age 42, got a standing ovation at Great American Ball Park when he entered the game as DH in the seventh. He was 0 for 2.

"Pretty neat," St. Louis manager Oliver Marmol said. "(Fans) were asking for him the whole game, so I'm glad I finally got to put him out there. Situation was right. It's great to have that weapon off the bench."