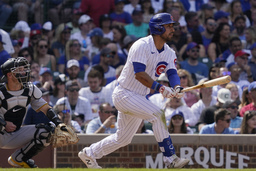 CHICAGO (AP) Alfonso Rivas had three hits and five RBIs, and the Chicago Cubs stopped a four-game slide by pounding the Pittsburgh Pirates 21-0 on Saturday.

Rivas, who was recalled Friday from Triple-A Iowa, capped Chicago's eight-run second with a three-run homer. He tacked on RBI singles in the fourth and fifth.

Rivas is 5 for 11 over his two stints with the Cubs this year.

It was more than enough support for Kyle Hendricks (1-1), who pitched seven innings of two-hit ball. Sean Newcomb worked the eighth in his Cubs debut and Scott Effross finished the three-hitter.

"It was easy to pitch to contact," Hendricks said.

The Pirates (7-8) have lost four of their last six games. It was the largest loss in Pirates history, and the 21 runs equaled the most they have allowed since May 25, 1954, at the New York Giants.

Thompson allowed four consecutive hits with one out in the second before shortstop Kevin Newman committed errors on consecutive plays. Newman has been charged with four errors in 12 games after making three in 132 games in 2021.

The Pirates' bullpen, which held the Cubs scoreless for 10 1/3 innings in the first two games of the four-game set, allowed 12 earned runs over the final six innings. Infielder/outfielder Diego Castillo pitched the eighth and allowed four runs.

Eighteen of the Cubs' hits were singles. Suzuki, Contreras and Happ hit consecutive doubles to start a five-run fifth.

The Pirates and Cubs are the only major league teams to each have a 20-run shutout against the other, according to STATS. The Pirates beat the Cubs 22-0 on Sept. 16, 1975.

Pirates: 2B Josh VanMeter was scratched because of an illness.

Cubs: OF Clint Frazier (appendicitis) underwent successful surgery. "I got a pretty funny text back saying he's ready to rake," Ross said. "He seems to be doing well."