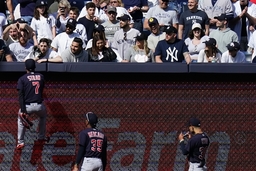 NEW YORK (AP) The only catch Cleveland right fielder Oscar Mercado was able to make in the ninth inning was a beer can thrown at his face.

Some fans in the notoriously rowdy right-field bleachers at Yankee Stadium pelted Cleveland outfielders with bottles, cans and debris in a chaotic scene Saturday, moments after New York rallied for a 5-4 win.

Rather than celebrating after Isiah Kiner-Falefa and pinch-hitter Gleyber Torres got RBI hits with two outs in the ninth, stars Aaron Judge, Giancarlo Stanton and other New York players rushed toward the wall in right-center field, trying to calm the crowd.

Security personnel joined the effort to quell the disturbance.

"You certainly don't want to put anyone in danger. I love the intensity, but you can't be throwing stuff out on the field," Yankees manager Aaron Boone said.

Cleveland closer Emmanuel Clase (0-2) was one strike from preserving a 4-3 lead when Kiner-Falefa hit a 100 mph fastball for a tying double. Rookie left fielder Steven Kwan ran hard into the wall chasing the ball and a trainer went out to check him.

"Kwan was a little shaken up and had some cuts on his face and there was a specific Yankee fan in left field that was celebrating Kwan getting hurt," Mercado said. "It's almost like, it's acts of violence. You can't say stuff like that, especially when someone gets hurt."

"I just let him know, `Listen, man, you can chirp all you want but don't celebrate someone getting hurt.' That's classless and that shouldn't be a thing," he said. "You can root for your team all you want, I'm not denying that. Honestly, it's good for the game when there are die-hard fans, but do it the right way."

Before play resumed, Mercado pointed at the stands and center fielder Myles Straw climbed the chain-link fence in left to confront face-to-face at least one fan, while another fan nearby made a derogatory gesture.

"I think Myles was sticking up for his teammate," Cleveland manager Terry Francona said. "The kid's out there bleeding and we're checking him for a concussion, and I think emotions probably got a little out of control."

Torres followed by lining a single to right-center for the game-winner. As Mercado and Straw chased the ball in the gap, several fans began throwing objects at them.

"One came close to my face and I caught it. It was a beer can," Mercado said.

"They need to be held accountable and I think there should be rules set up for that because that's ridiculous and that should not happen," he said. "Say whatever you want to say and do whatever you want to do, but at the end of the day there's got to be consequences for behavior like that."

He added: "I appreciate the Yankees players coming out and trying to control them and I have a lot of respect for that."

The Yankees won for the fourth time in five games and got their second walk-off win following a rare bullpen meltdown. The final scene wasn't what they wanted.

"That can't happen. I love the fans, love the atmosphere, but we win with class," Kiner-Falefa said.

Said first baseman Anthony Rizzo: "Our fans are passionate, they bring the noise every night and we appreciated that. When beers start flying, you just want to get everyone under control as best as you can so things don't escalate."

Chad Green allowed a two-run homer to Austin Hedges with two outs in the eighth that put Cleveland ahead 4-3. Miguel Castro (1-0) tossed a scoreless ninth.

Josh Naylor hit a two-run homer off Nestor Cortes for Cleveland's only hit in 6 1/3 innings off the crafty left-hander.

Josh Donaldson homered in the seventh against Cal Quantrill to give the Yankees a 3-2 lead.

Guardians: INFs Yu Chang and Owen Miller and RHP Anthony Castro remained on the COVID-19 IL. General manager Mike Chernoff did not have an update. . RHP James Karinchak (shoulder) is expected to throw a bullpen at the spring training complex in Arizona this weekend. . C Luke Maile (strained left hamstring) is to continue a rehab assignment with Triple-A Columbus.

RHP Aaron Civale (0-1, 6.14 ERA) will start for Cleveland against New York RHP Gerrit Cole (0-0, 6.35). Cole pitched a career-low 1 2/3 innings Tuesday in Detroit. He matched his career high of five walks and allowed two runs and one hit, throwing just 37 of 68 pitches for strikes. "We were going for really perfect pitches I think probably too often, and I think that just in some certain situations if I just attacked the zone better, we would have been in a better spot," Cole said Saturday.