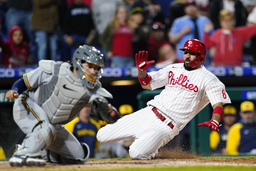 Jean Segura, Nick Castellanos and J.T. Realmuto also had two hits each for Philadelphia, which won for just the third time in 10 games.

Former Philadelphia fan favorite Andrew McCutchen doubled and drove in a run for the Brewers.

Harper batted third as the designated hitter once again after an MRI showed a strain in his right elbow. The reigning NL MVP, who hasn't played right field in five straight games, first injured his elbow on April 11. He won't throw again until Tuesday, though he doesn't experience discomfort at the plate.

Harper started the Phillies' rally in the eighth with a single, and Castellanos and Realmuto followed with singles to load the bases against Aaron Ashby (0-2). Ashby fanned Kyle Schwarber for the first out, and then was lifted for Brad Boxberger.

Bohm drove Boxberger's 2-2 pitch to the opposite field in right to score Harper and Castellanos and put Philadelphia in front 3-2. He went with the pitch and didn't try to do too much.

"Those are the situations, less is more," Bohm said.

Bohm was caught on camera using an expletive earlier this season to describe playing in Philadelphia while getting booed during a three-error game. He apologized afterward, received a standing ovation the following day and once again was embraced with loud cheers after his clutch hit.

The hit gave Bohm nine RBIs, which is second on the Phillies behind Harper's 11. Bohm is batting a team-best .440.

"He's been great all year for us," Harper said. "What an at-bat for us in (the eighth) inning."

Corey Knebel pitched a perfect ninth for his third save in as many opportunities.

Milwaukee went in front 2-1 in the seventh. Mike Brosseau walked and Victor Caratini singled to start the frame, and both advanced on Jose Alvarado's wild pitch. Brosseau scored on McCutchen's sacrifice fly.

McCutchen started the game with a double that ended a 10-pitch at-bat. A single and error followed to load the bases with no outs, but Ranger Suarez escaped the jam with a pair of strikeouts and a groundout. Suarez gave up a run on four hits in 4 ? innings.

After two shaky starts to begin the season, Freddy Peralta looked more like his 2021 All-Star form while allowing one run on three hits with six strikeouts and two walks in five innings. The 25-year-old right-hander dropped his ERA from 11.57 to 7.5.

"As the game went on, he got better and better," Counsell said.

McCutchen had 47 homers and 143 RBIs in 260 games for the Phillies during the past three seasons. He received a warm ovation from the crowd of 29,285 upon his introduction in the first inning.

Brewers: INF Luis Arias (left quad strain) will begin a rehab assignment at Double-A Biloxi on Saturday. . 2B Kolten Wong was replaced in the third inning due to a stomach illness.

Phillies: OF Odubel Herrera (strained right oblique) was activated from the injured list. He started in center field and went 0 for 2 with a strikeout. Simon Muzziotti was optioned to Double-A Reading to make room for Herrera.