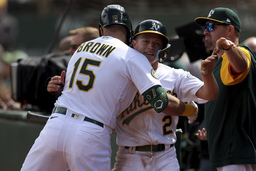 OAKLAND, Calif. (AP) Sean Murphy snapped out of an offensive funk and played heads-up defense in a close game, too.

Murphy homered, doubled and drove in three runs while ending an 0-for-10 stretch, and also made an alert play that led to the ejections of Baltimore star Trey Mancini and manager Brandon Hyde as the Oakland Athletics beat the Orioles 6-4 Thursday.

Mancini ran through the bag and stopped just shy of first-base umpire Rob Drake. As Mancini turned into fair territory to walk back to first, Murphy - hustling from his catcher's spot to back up the play - tagged him. Mancini was called out and held back by Hyde, both of them furious and clearly feeling the Orioles slugger hadn't made a move toward second.

"Never for one second did I think about going to second base," Mancini said. "I just turned around to my left and walked back to the bag. If it had even crossed my mind to go to second base, I would have made sure that I got back to the bag quickly. I was very surprised and couldn't believe it. And I want to apologize for the language I used and the way that I conveyed my message to Rob, but I still don't agree with the call."

Hyde said he was told by Drake that Mancini exhibited "intent to go to second base."

"I just didn't see any intent by Trey there, he just squared up and went back to first base and Trey thought he did the same thing," Hyde said. "He told us to look at it, we did and our view there's no intent there. Those things happen."

Allen credited Murphy for being ready when the crazy play developed.

"I had to get rid of the baseball and unfortunately it was just a little low and something where it was uncomfortable for Brownie," Allen said. "Luckily Murph is so smart back there and he was right behind it and he knows how to play this game. He tagged him out and we got out of the inning. That was awesome."

Allen doubled in the seventh for his first major league hit and Cristian Pache homered as Oakland took three of four in its opening home series of the year.

Paul Blackburn (2-0) allowed one run on three hits, struck out four and didn't walk a batter over five innings for his first career victory over the Orioles. It was only the third time the right-hander faced Baltimore and first since two starts in 2017.

Dany Jimenez, Oakland's fifth reliever, finished for his second save.

Murphy hit a two-run homer in the fifth and doubled home an insurance run.

Austin Hays hit an RBI double and run-scoring single for the Orioles.

Baltimore starter Tyler Wells (0-2) was done after just 2 1/3 innings in his third career start and first against the A's.

Pache homered leading off the third for Oakland. Tony Kemp doubled one out later and Sheldon Neuse followed with the first of his two RBI singles.

Orioles: C Robinson Chirinos was held out of the lineup. A day earlier, he was hit by a pitch and the ball glanced off his left shoulder and bruised his face. Chirinos avoided a concussion.

Athletics: C/1B Stephen Vogt was placed on the 10-day injured list with what manager Mark Kotsay described as a Grade 2 sprain of the medial collateral ligament in his right knee. Vogt is wearing a brace and said it could be 4 to 6 weeks to recover. "I'm just bummed," he said. ... C Austin Allen took Vogt's place, reinstated from the COVID-19 injured list. The A's designated RHP Miguel Romero for assignment and added catcher/first baseman Christian Bethancourt to the 40-man roster after he served as the substitute player with all of the players on the COVID-19 injured list. ... RHP James Kaprielian pitched 4 2/3 innings in a rehab start for Triple-A Las Vegas, allowing four runs on nine hits with five strikeouts and one walk in a 12-5 win over El Paso.

LHP Bruce Zimmerman (0-0, 0.00 ERA), who has begun the season with nine scoreless innings in his first two outings, pitches the series opener on the road Friday against the Angels.

A's RHP Adam Oller (0-1, 13.50) pitches against Texas trying again for his first win with Oakland after being acquired from the Mets in the Chris Bassitt trade on March 12.