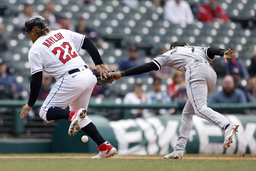 CLEVELAND (AP) Josh Naylor had two hits and two RBIs, continuing his comeback from a devastating leg injury and helping the Cleveland Guardians complete a series sweep of the Chicago White Sox with a 6-3 victory on Thursday.

Cleveland took both games of a doubleheader Wednesday against Chicago, which has lost four straight.

Naylor hit an RBI single in the fifth and a run-scoring double in the seventh. He was activated Friday after suffering multiple fractures in his right leg during an outfield collision last June. He had surgery and completed a lengthy rehab process that included a stint in the minors to begin this season.

Naylor pumped his fists and pointed toward Cleveland's dugout following both hits.

"It's awesome, but it's about more than me," he said. "It's about the team and we did a good job this series."

Franmil Reyes, who hit his first home run of the season, is happy to see Naylor back on the field.

"He's my best friend and it's great to see him there, playing with that big smile and cheering for the team, no matter how he's doing," Reyes said. "I remember when he came back he was always like you've got this, it's going to be OK. So, I'm glad to be his teammate every time."

Cleveland right-hander Zach Plesac (1-1) allowed two runs, one earned, and seven hits in 6 2/3 innings. Emmanuel Clase pitched the ninth for his second save.

Reyes put Cleveland in front with a two-run shot off Dylan Cease (2-1) with two out in the third. Reyes drove in rookie Steven Kwan, who was aboard on a leadoff double.

Cease allowed four runs in 5 1/3 innings and believes better days are ahead for the White Sox, who have been dealing with injuries to several key players.

"This happens in baseball," he said. "We dealt with it a lot last season. It's one of those things where we have to keep stepping up. It's part of the game."

Yasmani Grandal's sacrifice fly in the fourth scored Chicago's first run. The first three hitters reached base in the inning, but Luis Robert was thrown out when he tried to score on Jose Abreu's double.

Reyes, making a rare appearance in right field, played the towering drive off the wall. Robert waited at second base to see if the ball was caught and was tagged out at home by Austin Hedges after the throw from Reyes to second baseman Ernie Clement.

Robert snapped an 0-for-21 skid with a leadoff double. He singled in the sixth but was thrown out trying to steal second. Robert was removed in the eighth with a minor groin strain and could possibly be placed on the injured list, according to White Sox manager Tony La Russa.

Chicago has scored 15 runs in its last seven games, but La Russa is confident the defending AL Central champions will find their groove offensively.

"We were a lot more ourselves today," he said. "We played better, but they just outplayed us the whole series. That's what happens. We took care of our business. It wasn't enough."

Reliever Trevor Stephan and Clement had throwing errors on the same play in the seventh that allowed two unearned runs. Cleveland got both runs back in the bottom of the inning on Naylor's double and Andres Gimenez's sacrifice fly.

Jose Ramirez had two infield singles and has hits in all 12 games this season. He signed a seven-year, $141 million contract last week.

White Sox shortstop Tim Anderson committed his fourth error of the series on a wild throw in the first.

Cleveland Infielder Gabriel Arias was optioned to Triple-A Columbus after being added as the 29th man for Wednesday's doubleheader. Arias got his first major league hit in the second game.

White Sox: Eloy Jimenez returned as the designated hitter after not playing in the doubleheader because of a sore left ankle. ... OF AJ Pollock (hamstring) is expected to return Friday.

Guardians: Infielders Owen Miller and Yu Chang and pitchers Cal Quantrill and Anthony Castro remain on the COVID-19 injured list. The four players stayed in Cleveland when the team flew to New York for a series against the Yankees.

"They can't go with us," Cleveland manager Terry Francona said. "They can't come into the ballpark. They're confined to being away from us."