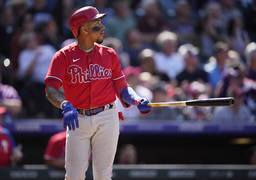 DENVER (AP) Johan Camargo had four hits, including a three-run home run in a five-run seventh inning, and the Philadelphia Phillies beat the Colorado Rockies 9-6 on Wednesday to stop a three-game losing streak.

Kyle Schwarber added a rare homer into the right field third deck at Coors Field, and Nick Castellanos and Alec Bohm also went deep. The Phillies finished a 2-5 trip with their second win in nine games.

The switch-hitting Camargo, starting at shortstop for the injured Didi Gregorius, had three singles before his shot to left against lefty Lucas Gilbreath.

Camargo is 6 for 8 since Gregorius exited Tuesday's game with a bruised left hand and may be forcing manager Joe Girardi to play him more.

Camargo's first home run of the season came after Gilbreath forced in the tiebreaking run when he hit Schwarber with a pitch with the bases loaded.

"I'm there to get Schwarber out and I lost control of that one pitch," said Gilbreath, who was making his season debut after being on the COVID-19 list. "Things kind of spiraled from there. I dropped the ball. It kicked our offense out of the game."

Jhoulys Chacin (2-1) allowed a walk and two singles before Gilbreath replaced him.

Ryan McMahon doubled twice and drove in three for the Rockies, who couldn't complete the three-game sweep.

Schwarber crushed German Marquez's 0-2 slider 468 feet to right in the sixth for his fourth homer to tie it at 4, the third-longest home run of Schwarber's big league career.

"Everybody was going nuts in the dugout," Phillies starter Zach Eflin said.

Added Camargo: "Oh my God. Is this the Home Run Derby or what?"

Castellanos hit his third homer to lead off the fourth as the Phillies closed to 2-1. Three batters later, Bohm hit his first, a two-run shot to right-center.

The Rockies jumped on Eflin with three hits in the first, including McMahon's two-out double to right. They retook the lead with a two-run fifth capped by C.J. Cron's two-out single. Cron's double in the seventh gave him 16 RBIs.

Eflin allowed four runs and nine hits in 5 2/3 innings. Brad Hand (1-0) got the final out of the sixth and Corey Knebel pitched a perfect ninth his second save as the Phillies avoided falling five games below .500 for the first time since Aug. 22, 2020.

Phillies: Gregorius had swelling in his left hand a day after getting hit by a pitch. Girardi said he was sore but "the preliminary reports are good." ... OF Bryce Harper remained at DH due to a sore right elbow. "He threw a little bit in the cage (Tuesday)," Girardi said.

Rockies: RHP Chad Kuhl (right hip flexor) is scheduled to make his normal start Sunday after an early exit Monday. ... Marquez stayed in after taking Camargo's one-hop comebacker off his lower back in the second.

"Whenever contracts are negotiated there is going to be back and forth, a lot of different emotions flying around," Freeland said before the game.

The Denver native said his wife, Ashley, helped him gain clarity as he pondered his future.

"Two starts ago I was sitting at my locker and I saw a lot of my teammates in there and I said, `You know what, these are guys that I love going to battle with,'" Freeland said. "When I told my wife that, she said, 'I'm going to stop you right there, that's your answer.'"

Girardi said RHPs Aaron Nola and Kyle Gibson are at the point they can throw a normal 100-pitch start, but the other three in the rotation will need another shortened start or two.

And Girardi is confident RHP Zack Wheeler and will regain his velocity soon as pitchers deal with building up during the season due to the abbreviated spring training.

Rockies OF Charlie Blackmon told manager Bud Black in a text early Wednesday that he was signing the first sports betting endorsement deal for an active major league player.

"I didn't know what he was talking about," Black said.

He was then told about the growing sportsbook market.

"I do square pools," Black said. "I lose my money on the golf course."