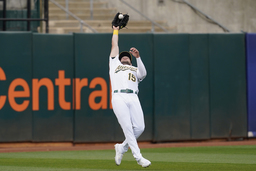 OAKLAND, Calif. (AP) Jordan Lyles shut down Oakland's batting order for five innings, then turned it over to a lights-out Baltimore bullpen that has gone from one of the worst in baseball a year ago to suddenly one of the best.

Lyles struck out six and walked one over five scoreless innings for his first victory with the Orioles as Baltimore beat the Oakland Athletics 1-0 on Wednesday.

Ryan McKenna scored Baltimore's only run on a fielding error by Athletics shortstop Elvis Andrus in the fifth inning.

"It was a great performance on the pitching side, more on the bullpen, guys what they've done all year, it was steady and super consistent," Lyles said.

Tony Kemp hit a leadoff single in the eighth against Bryan Baker, who then allowed Sheldon Neuse's single before a pair of strikeouts and a groundout to escape the inning. Lopez finished for his second save.

"Our guys were fired up. The dugout exploded after that last out," Baltimore manager Brandon Hyde said. "What an amazing job by all of our pitchers, especially Lopey there coming in at the end of the game."

The game time was pushed up 3 1/2 hours because of heavy rain in the forecast that could force cancellation of Thursday afternoon's scheduled series finale.

"I think this was a great decision made to ensure that we got this game in," A's manager Mark Kotsay said. "... It is a disruption to the fans and that's something we've got to be aware of. ... We're going to make adjustments as well for them."

Seth Brown fouled off seven straight pitches before a double to right in the second inning. McKinney was on first after a leadoff single and he slid headfirst trying to score on Brown's hit. A run went up on the scoreboard, Baltimore challenged and the play was overturned on a ruling that catcher Anthony Bemboom tagged McKinney in time.

"I thought I got my hand in but that's all part of it, there's a replay process for a reason and they saw it different," McKinney said.

Barring any canceled games, A's center fielder Ramon Laureano is on target to return from his 80-game suspension for a banned substance the first day he's eligible, May 8 at Minnesota. The suspension for Nandrolone began in August and extended 27 games into this season.

He has been working out at extended spring training and soon will report to Triple-A Nashville. Athletic trainer Nick Paparesta said he and Kotsay would come up with a progression of games for Laureano, who played nine innings Tuesday.

Orioles: Bemboom entered to catch for Robinson Chirinos, who was hit by a pitch in the second that glanced off his left shoulder and bruised his face. "

Athletics: 3B Kevin Smith went on the 10-day injured list retroactive to Tuesday with a bone bruise in his left ankle that will keep him in a walking boot for the near future. His leg bone jammed into the ankle bone on an awkward slide into first Tuesday. ... LHP A.J. Puk, a close contact with someone who tested positive, was activated from the COVID-19 IL but will continue testing and wearing a mask all week. The players on the COVID list have been working out on their own, all feeling better. "We basically had a little COVID team," Paparesta said. ... The A's also selected OF Mickey McDonald from Triple-A Las Vegas and he made his major league debut as a pinch-hitter in the ninth and struck out to end the game. ... Switch-hitting OF Skye Bolt (strained right oblique) began throwing and is expected to take some swings from the right side by the weekend.

RHP Tyler Wells (0-1, 6.35 ERA) makes his third career start and first vs. the A's. Oakland counters with RHP Paul Blackburn (1-0, 1.80), who has never beaten Baltimore and will face the Orioles for the third time overall and first since two starts in 2017.