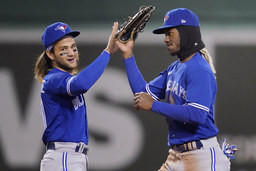 Jose Berrios (1-0) won for the first time in three starts this season, allowing one run and eight hits in six innings with six strikeouts and one walk. He lowered his ERA from 11.81 to 6.35.

"They have a pretty good lineup, a great team. We like to compete against a team like that," Berrios said. "I came to have fun, compete, and I did it. Nothing's going to be easy, so you have to find a way."

Nick Pivetta (0-3) gave up five runs, seven hits and four walks in four innings. His ERA rose from 9.39 to 10.03, and the 29-year-old Canadian right-hander failed to reach the fifth inning for his second straight start.

J.D. Martinez had an RBI single in the first that drove in Rafael Devers, who had doubled. Martinez left with left adductor tightness after doubling to lead off the third.

Matt Chapman singled leading off the second, and Tapia homered to right for a 2-1 lead. Pivetta walked Santiago Espinal on a full count and Alejandro Kirk on four pitches, and Cavan Biggio's single loaded the bases.

George Springer hit a sacrifice fly, and Bo Bichette followed with a two-run single for a 5-1 lead.

Espinal added a seventh-inning sacrifice fly. Lourdes Gurriel Jr. and Tapia stole bases in the inning after Toronto entered with three this season.

"The approach was better," Toronto manager Charlie Montoyo said. "We saw more pitches, not in the first couple of innings but after that we saw a lot of pitches and we made their guy throw a lot of pitches. That's what you want as a lineup."

The Red Sox honored former second baseman Jerry Remy in a pregame ceremony. Remy, a native of Somerset, Massachusetts, made his major league debut with the California Angels in 1975 before spending more than 40 years with the Red Sox organization as a player, coach and broadcaster. He died on Oct. 30 after a lengthy battle with lung cancer. Former Red Sox teammates Fred Lynn, Dwight Evans, Bob Stanley, Rick Burleson and Hall of Famers Jim Rice, Dennis Eckersley and Carl Yastrzemski were in attendance.

Blue Jays: After being hit by a pitch from Phillips Valdez in the sixth, Springer left in the bottom of the inning with a bruised right forearm. X-rays were negative.

Red Sox: C Christian Vazquez was reinstated from the COVID-19 related injury list, where he was placed before Monday's game. C Ronaldo Hernandez was optioned to Triple-A Worcester. ... 2B Trevor Story was hit on the helmet by a Berrios pitch in the third inning but stayed in the game.

Red Sox: RHP Tanner Houck (1-0, 3.00) will make his third start of the season. This will also be his third career start against the Blue Jays. He has a 2.35 ERA against Toronto, without a decision.