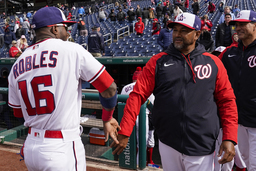 WASHINGTON (AP) Victor Robles started the season 0 for 18. Even after finally getting his first hit, the Washington Nationals center fielder was batting .045 in 2022 when he stepped to the plate to face Arizona starter Madison Bumgarner and fell behind in the count 1-2.

Oh, and Bumgarner to that point? He was one strike away from finishing five no-hit innings.

So, naturally, Robles came through for the hosts, delivering an RBI double for Washington's first hit, sending the Nationals on their way to a 6-1 victory over the Diamondbacks in the opener of a split doubleheader before a record-low announced crowd of 9,261 on Tuesday.

"I don't focus on my personal numbers at all," said Robles, who produced a two-run single on Sunday to lift his average from .000. "As long as I feel good out there, and the team's winning, that's all that matters."

"He wants to go deeper in games, but when you're in the fifth inning with 80-something pitches already, I thought that was it for him," Martinez said about Gray, one of the top prospects Washington received in the trade that sent Max Scherzer and Trea Turner to the Los Angeles Dodgers in July. "I wanted him to come out feeling good about himself - and he did that."

Gray's take on being removed?

"Never really want the ball taken from me," he said, "but I understood the situation."

Daulton Varsho produced the Diamondbacks' run by driving a 94 mph first-pitch fastball from Gray to straightaway center in the third. The Diamondbacks entered with major league lows for batting average (.152) and runs (21), and the Game 1 loss dropped their record to 3-7.

Bumgarner (0-1) gave up two unearned runs and two hits in his five innings. He walked four and struck out five.

The lefty whiffed the first two batters of the fifth, but that's when Arizona unraveled, starting with a defensive miscue on a windy afternoon in which napkins flew from the stands and littered the outfield grass: Second baseman Ketel Marte didn't hold onto a popup that should have been the third out.

That brought up No. 9 hitter Robles. Bumgarner left a two-strike pitch over the plate, and Robles smacked it down the left-field line to tie the game.

Cesar Hernandez followed with another RBI double off Bumgarner.

Other than in 2020 and 2021, when there were limits on spectators because of the coronavirus pandemic, this was the fewest fans announced for a Nationals home game since the team moved to Washington from Montreal for the 2005 season.

The Nationals give the numbers of tickets sold, not the number of people who actually are in the ballpark. There appeared to be fewer than the official total on a gray day with the temperature in the 40s and two teams that began the day in last place.

Game 2 was scheduled to begin at 7:05 p.m. EDT, with Washington's Joan Adon pitching against Arizona's Tyler Gilbert. The doubleheader was caused by rain that washed out the series opener on Monday.

This was the first doubleheader of the nascent baseball season - the Giants and Mets started another rain-created twinbill later Tuesday - and the first involving nine-inning games since Sept. 28, 2019. Major League Baseball used seven-inning doubleheaders as part of rules changes amid the pandemic, but restored the full-length games for 2022.

Doolittle's streak of retiring every batter he faced to start the season ended at 15 when No. 16, Seth Beer, doubled off him in the sixth.

Arizona RHP Merrill Kelly (0-0, 0.00 ERA), one of four starting pitchers not to allow a run through a minimum of two starts this season, faces Washington RHP Erick Fedde (1-0, 3.60) on Wednesday.