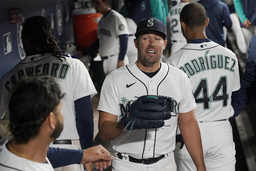 Ray, the reigning 2021 AL Cy Young Award winner, made his first two starts on the road and finally pitched in front of his new home crowd at T-Mobile Park after signing a $115 million, five-year contract.

"It felt great," Ray said. "It's nice to get the first one out of the way and pitch in front of the home fans and be able to come through and get a win for us."

Sticking mainly to his four-seam fastball and slider, Ray (2-1) allowed two runs and four hits, and struck out four. Marcus Semien had a sacrifice fly in the third and a two-out double in the fifth to cut the lead to 4-2.

"Maybe not quite as sharp as we've seen with some outings, but very aggressive in the strike zone, got after it and got the ball rolling in the right direction for us," Seattle manager Scott Servais said.

Ray's previous start was hampered by bad weather in Chicago, when he allowed six runs, 10 hits and three home runs in 6 1/3 innings.

"It felt good to have conditions that are conducive for pitching," Ray said.

Ray got early support from Suarez, who acquired by Seattle along with outfielder Jesse Winker from Cincinnati during spring training.

Suarez took advantage of first-inning struggles by Texas starter Jon Gray (0-1), who was returning from the injured list.

Gray hit Ty France and walked Winker. Ahead in the count 0-2, Gray missed his spot with a slider on the chilly night and Suarez hit his third homer this season.

"I just tried to put the ball in play," Suarez said. "I think he made a really good pitch but my swing was better."

Jarred Kelenic hit his second homer of the season, a solo shot in the second off the right-field foul pole. Abraham Toro hit his first homer, a two-run drive in the seventh.

Gray, who had been sidelined by a blister on his right middle finger, gave up four runs and three hits in five innings.

"We hit a lot of balls hard. Our hardest hit balls were later in the game and they just unfortunately found the glove of the other team," Woodward said. "Today was a step forward in a lot of ways. I know we lost and it sucks to lose, but we played a better game. At least we kept fighting."

Drew Steckenrider, Paul Sewald and Diego Castillo finished the six-hitter, retiring eight of the final of 10 batters around a pair of singles. Seattle's bullpen came into the game owning the lowest opponent batting average at .164.

"Our bullpen is electric. All the guys down there are pretty amazing," Ray said. "We got guys that can pitch in any situation."

Rangers: Texas RHP Greg Holland was designated for assignment to clear a roster spot for Gray's return. Holland was 0-1 with a 7.71 ERA in five appearances this season.

Mariners: Seattle placed C Luis Torrens on the COVID-19 injured list. Torrens is the second Seattle player to land on the virus list in recent days. OF Mitch Hangier was placed on the COVID-19 list on Saturday after he tested positive. In four games, Torrens was 3 for 13, all singles. Seattle selected the contract of INF Mike Ford from Triple-A Tacoma.

Mariners: RHP Logan Gilbert (1-0, 0.90) takes the mound for his third start of the season, first in Seattle. In his last start against the White Sox, Gilbert allowed zero earned runs in five innings to pick up his first win.