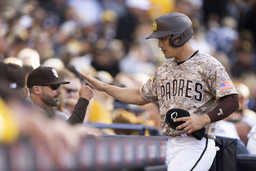 SAN DIEGO (AP) Yu Darvish rebounded from the shortest outing of his career by dominating into the seventh inning and the San Diego Padres beat the Atlanta Braves 2-1 Sunday night despite having just three hits.

"Aggressive use of his fastball, all-count breaking balls," Padres manager Bob Melvin said. "He didn't walk anybody. He was really, really good against a great lineup."

Darvish (1-1) allowed a run and struck out eight in 6 2/3 innings against the World Series champions after covering just 1 2/3 innings and allowing nine runs against San Francisco on Tuesday.

"I will never forget the last outing," Darvish said through a translator. "I thought the fastball was pretty good today. There was some good ride to it. ... I thought the two-seamer, especially to righties, was working pretty good."

The Padres' 35-year-old ace had command throughout, allowing his only run on Marcell Ozuna's homer in the seventh. His gem allowed San Diego to split the four-game series.

"He was in the zone a lot more. He was pitching on both sides of the plate," Padres catcher Austin Nola said. "He was executing the corners, which makes it very difficult to hit."

The Padres got their runs in the second inning, after loading the bases against starter Bryce Elder (1-1). Nola was hit by a pitch, and Jake Cronenworth followed with an RBI fielder's-choice grounder. San Diego batters walked eight times in the game.

"Offensively we were patient again. We drew a lot of walks," Melvin said. "In close games a lot of it has to do with defense and we were really good again tonight."

Taylor Rogers retired the Braves in order in the ninth for his fourth save, closing out a four-hitter for San Diego.

"Righties, lefties, (Rogers) has weapons for both," Melvin said. "That slider is no fun at all. The sinker, he keeps it down and gets groundballs."

Elder went 4 1/3 innings before handing off to rookie Spencer Strider, who didn't allow a hit or a run over 3 2/3 innings. Strider walked three and struck out three.

Matt Olson had two hits, including a double, for Atlanta and raised his batting average to .421 in his first season with the Braves.

"He has become such a good hitter now - goes the other way now with two strikes, isn't trying to pull all the time," said Melvin, who managed Olson for six seasons with Oakland. "That was a pretty good pickup for them."

Padres: OF Wil Myers (right thumb soreness) missed Sunday's game with an injury that flared up in his final at-bat Friday night. He is day-to-day and San Diego does not anticipate he will have an IL stint.

Braves: RHP Huascar Ynoa (0-1, 15.00) takes the hill on Monday night in the opening game of a three-game set at the Los Angeles Dodgers.

Padres: LHP Sean Manaea (1-1, 1.38) goes for his second win of the season Monday night in the first of three home games against the Cincinnati Reds.