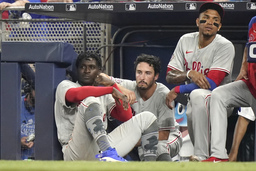 Pablo Lopez (1-0) scattered four hits in 5 1/3 scoreless innings. He struck out two and walked two for his first victory since July 11.

Jesus Aguilar drove in three runs with two sacrifice flies and a single. Miami's RBI leader with 93 last season, Aguilar had not driven in a run through the club's first six games.

"You know this game, a lot of ups and downs," Aguilar said. "When we got back home, I think we've played really good at everything. We've got to come through here. We're playing right."

Nick Castellanos homered in the eighth for the Phillies, who have lost four straight.

Philadelphia finished 0-for-9 with runners in scoring position. Slugger Kyle Schwarber, who signed a four-year, $80 million free-agent deal, is in a 1-for-28 funk since his two-hit opening day. Schwarber was the final out Friday, striking out with two runners on base.

The Marlins struck quickly against Zach Eflin (0-1) on Sanchez's RBI double and Aguilar's run-scoring single in the first.

"That was our game plan, to attack him," Sanchez said.

Jazz Chisholm Jr.'s two-run triple in the second made it 4-0.

Eflin (0-1) was lifted after four innings. The right-hander allowed four runs and six hits, struck out four and walked one.

Sanchez hit an RBI triple off Philadelphia reliever Nick Nelson and scored on Aguilar's sac fly in the fifth. Another sac fly from Aguilar in the sixth made it 7-0.

In observance of Jackie Robinson Day, Miami manager Don Mattingly allowed bench coach James Rowson to address the media before and after the game.

"Donnie, for Jackie Robinson Day, came to me earlier today and kind of handed over to me the pregame and postgame interviews in honor of what we're doing," Rowson said. "I appreciate that. And winning the game, he said I could come out here and handle it, and that he would have if we didn't. It's pretty cool for Donnie to allow this to happen."

Philadelphia's Simon Muzziotti led off the third with his first major league hit, an opposite-field single. The rookie center fielder also collided with the wall on a running catch that denied Aguilar of an extra-base hit in the bottom half.

Phillies: OF Odubel Herrera (strained right oblique) was scheduled to play seven innings with Class A Clearwater on Friday. Girardi does not expect Herrera to rejoin the club in its next series at Colorado.

Phillies catcher J.T. Realmuto rested Friday, a day after he reached base five times on four singles and a walk. Girardi said he wanted Realmuto in the lineup Saturday against a left-handed starter and didn't want the catcher to play six straight days.