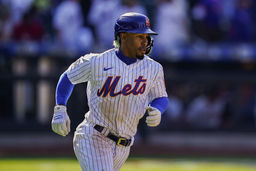 NEW YORK (AP) Opening day at Citi Field started with a salute to Tom Seaver and ended with cheers for Francisco Lindor.

The star shortstop homered from both sides of the plate to back another stingy outing from newcomer Chris Bassitt, and the New York Mets routed the sloppy Arizona Diamondbacks 10-3 in their home opener Friday.

Starling Marte launched a three-run shot, his first homer for the Mets in his first home game with the team. And on Jackie Robinson Day around the majors, Robinson Cano - named for the civil rights pioneer - connected for the first time since September 2020.

Seaver's widow Nancy and daughters Sarah and Anne spoke during a 40-minute pregame ceremony as the Mets unveiled a long-awaited statue of the Hall of Fame pitcher outside the ballpark. His grandsons, Thomas and Tobin, threw out ceremonial first pitches.

"It's a good day for our fans. Get a chance to honor Tom and Jackie. It starts there," new manager Buck Showalter said after winning his first home game with the Mets. "Regardless of what the outcome of the game was, it was the right thing to do. A lot of pressure on us to deliver."

Lindor and Cano, who sat out last season while serving his second suspension for performance-enhancing drugs, both wore special cleats for Jackie Robinson Day.

Cano has four career home runs on the anniversary date, and was asked if it was especially meaningful to homer on this day.

"For sure. This is the day that myself and everybody is always going to remember," he said. "You do something special on that day."

Pete Alonso lofted a pair of early sacrifice flies for New York (6-2), which has the best record in the majors. Travis Jankowski, subbing in center after two Mets outfielders went on the COVID-19 injured list, had three hits.

"We got thrown a pretty good curveball," Showalter said. "We got off script today and our guys responded well."

Acquired from Oakland in a trade last month, Bassitt (2-0) allowed one run and two hits in six innings. He received a warm ovation from the sellout crowd of 43,820 as he walked off the mound at the end of his Citi Field debut.

The All-Star right-hander struck out six and walked two. He fanned eight over six innings of three-hit ball last Saturday in his initial outing for the Mets, a 5-0 win at Washington.

Daulton Varsho clocked his first homer of the season off Bassitt in the sixth.

"We've got to be better," Arizona manager Torey Lovullo said. "This is a big stage for a young team. They're learning on the job.

"They made some young mistakes, we know that. I don't think anybody was overwhelmed. We just didn't execute."

Batting left-handed, Lindor chased Zach Davies (0-1) with a two-run drive into the second deck in right field that made it 5-0 in the fifth. The $341 million switch-hitter followed Marte's three-run homer in the eighth with a shot to left off reliever Caleb Smith.

It was Lindor's 14th career multi-homer game and the fourth time he's gone deep from both sides of the plate.

Lindor also walked twice, stole a base and scored three times in an auspicious start to 2022 at Citi Field after he was often booed last year during a miserable first season with the Mets. He was cheered loudly Friday from the get-go during pregame introductions.

"It's amazing to be welcomed to one of the greatest fan bases out there. It felt great to be able to hear the home crowd cheering me on and cheering the rest of the guys," Lindor said. "Fantastic. Exactly what we expected."

Marte, who signed a $78 million, four-year contract as a free agent in November, also stole a base and scored three times. He finished with three hits.

"I want kids to be able to come here and see how to play the game the right way," Marte said through a translator.

New York has won 11 in a row against the Diamondbacks at Citi Field since the start of 2018, outscoring Arizona 61-21.

New York went deep four times in its home opener for the first time. The Mets also have seven steals through eight games - they didn't reach seven stolen bases last year until their 29th game on May 8.

Lindor has three home runs. It took him 33 games to hit that many last season.

"I'm giving myself time to hit. I'm slowing the game down and I'm being consistent," he said.

Diamondbacks: SS Nick Ahmed (right shoulder inflammation) got seven at-bats at the team's spring training complex Thursday. ... Arizona catcher Carson Kelly was rested after starting 0 for 15 this season. ... SS Geraldo Perdomo was shaken up after getting hit just above the right elbow by a 92 mph fastball, but remained in the game.

Mets: Showalter said RHP Taijuan Walker (right shoulder bursitis) and reliever Trevor May (triceps) are doing well, and he thinks Walker has a chance to come off the 10-day injured list as soon as he's eligible on April 22. Showalter said LHP David Peterson is a "solid option" to start Sunday in Walker's place. ... OFs Brandon Nimmo and Mark Canha were placed on the injured list after a Mets coach tested positive for COVID-19. The team did not say whether Nimmo and Canha tested positive, and Showalter would not say whether either player is vaccinated.

Arizona RHP Zac Gallen faces Mets RHP Carlos Carrasco on Saturday. Humberto Castellanos is scheduled to start Sunday for the Diamondbacks after Smith was moved to the bullpen.