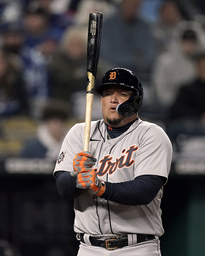 Miguel Cabrera doubled with one out in the seventh, leaving him five hits shy of 3,000. Torkelson followed one out later with a 432-foot bomb to left off Brad Keller, the second of his career. The rookie also had a two-out single in the fifth.

"It's a big emotional hit," Tigers manager A.J. Hinch said. "A big swing like that put a jolt in the dugout. It's a great way to stamp his arrival."

Tarik Skubal fanned six of the first eight Royals batters and retired the first 11 before Salvador Perez squeezed a grounder through the left side for the game's first hit with two out in the fourth.

"I felt pretty synced up to kind of incorporate the things I was working on," Skubal said. "I felt good from the start."

Jacob Barnes (1-0) worked 1 1/3 hitless innings, Joe Jimenez handled the eighth and Michael Fulmer pitched a perfect ninth for his first save as the Tigers combined on a five-hitter.

Skubal finished with seven strikeouts over 5 2/3 innings, and the only run he gave up was unearned. Andrew Benintendi reached with two out in the fourth on an error by shortstop Harold Castro, and Carlos Santana then singled to drive in Perez.

"He came in and established himself in the strike zone, which got them in swing mode, and then he's got the nasty slider," Hinch said of his starter. "There's just a lot to like with the way he attacked the hitters. He made some really big pitches."

Tigers: SS Javier Baez remains out of the lineup with right thumb soreness. "He's going to have a full work day, then we'll see how he feels," Hinch said. ... The Tigers placed RHP Casey Mize on the 10-day injured list with a sprained right elbow and recalled OF Daz Cameron from Toledo.