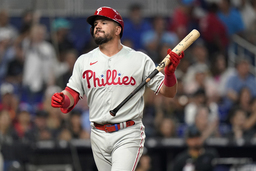 MIAMI (AP) The Miami Marlins tried to do less, and it worked.

Garrett Cooper hit his first home run of the year, while Jesus Sanchez had two hits and an RBI for Miami. The Marlins started the year with a 1-4 road trip, and manager Don Mattingly's diagnosis was that his team was trying to do too much.

"There's a fine line between trying to do what you want to do and what you execute," Cooper said. "The first few games, coming out of spring training, it was just guys trying to do too much, trying to be the hero. Just play baseball, do what you do."

Alcantara (1-0) gave up seven hits, struck out five and walked one. Anthony Bender pitched the ninth for his second save, giving up two singles and then getting Bryce Harper to fly to left to end the game.

Harper drove in three runs and J.T. Realmuto reached base five times - four singles and a walk - for the Phillies, who have lost three straight and four of five following a 2-0 start. Kyle Gibson (1-1) gave up five hits and four runs in 4 2/3 innings, walking three and striking out six.

It was the 67th time in Harper's career that he had at least three RBIs. His teams fell to 61-6 in those games.

"That first inning, they were aggressive to me," Alcantara said.

That they were. Alcantara was down 1-0 after only three batters, giving up a leadoff double to Schwarber, a single to Realmuto and then Harper's sacrifice fly.

He settled in nicely from there, becoming the first Marlins starter to get into the seventh inning this season. Alcantara allowed only one batter the rest of the way to reach third - Philadelphia had runners on second and third with one out in the fourth - but he worked out of it by inducing harmless pop-ups from Bryson Stott and Matt Vierling.

"My biggest feeling that I've had is that we're trying really hard," Mattingly said. "And sometimes, trying really hard and holding the bat tighter or squeezing the ball tighter is not really what you want. You want to be relaxed and focused."

The Marlins took Alcantara out two batters into in the seventh, and Harper cut the lead to 4-3 with a two-run double.

Gibson's rough inning was the fourth, when Cooper homered and Wendle had an eventful at-bat that ended up as a two-out, two-run double. Gibson threw behind Wendle for ball one, then nearly hit him again for ball two. After working the count to 2-2, Wendle flared one down the left-field line with runners Sanchez and Avisail Garcia - both off on the pitch - scoring easily to put Miami up 3-1.

"Wendle placed it well," Phillies manager Joe Girardi said. "Joey Wendle puts the ball in play. He's not going to strike out. He's going to put a tough at-bat on you and that's what he did. He got a base hit and that's the difference in the game "

Sanchez singled in the fifth for a 4-1 lead.

Phillies: SS Jean Segura (sore wrist, jammed right shoulder) is day-to-day. ... RHP Sam Coonrod (shoulder) was transferred to the 60-day injured list. "He's basically going to have to start spring training over," Girardi said. "It's so he doesn't rush and we don't rush."

Marlins: RHP Dylan Floro (shoulder) threw a bullpen before the game. ... RHP Edward Cabrera (biceps) threw 20 pitches at the Marlins' complex in Jupiter, Florida, on Wednesday as part of his rehab plan.

The Marlins have finally added actual World Series banners, suspended from the roof beyond the left field foul pole, to commemorate the 1997 and 2003 championships. They replaced small pennants that had been in the same area of the ballpark since its opening in 2012.