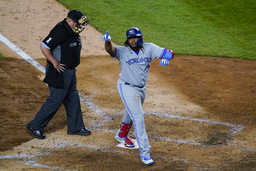 NEW YORK (AP) Vladimir Guerrero Jr. declared this spring that last year was just the trailer for the upstart Blue Jays. This season would be the feature-length film.

Bloodied by a baserunner's cleats and forced into the dugout, Guerrero sure looked to manager Charlie Montoyo like a best picture winner.

Audiences agree: Guerrero delivered a trilogy worth seeing Wednesday night in the Bronx.

Guerrero shook off a bloody gash on his right ring finger and hit three home runs against the rival Yankees, including two off ace Gerrit Cole, as Toronto beat New York 6-4. He also had a double and slickly gloved a sharp line drive for the game's final out.

"Add that one to my list," Guerrero said via translator when asked if it was his most impressive feat yet.

George Springer hit a tiebreaking single in the seventh, and Toronto held off the Yankees despite homers from Anthony Rizzo, Aaron Judge and Gleyber Torres - and a fly in the eighth by pinch-hitter Giancarlo Stanton that was caught on the warning track.

Guerrero had a big hand in that.

The AL MVP runner-up homered off Cole in the first inning, had his hand accidentally spiked on a play at first base in the second, then hammered a line-drive, two-run shot against Cole in the third to put Toronto up 3-0.

He doubled off Cole in the sixth - prompting the pitcher to emphatically tip his cap - then launched a 443-foot leadoff homer against Jonathan Loaisiga in the eighth for a 5-3 lead.

Guerrero got two stitches after the game but said his hand felt fine, although he anticipated some soreness might set in Thursday.

It was the second three-homer game of Guerrero's career, matching a career high set last April 27 against Washington. He was on deck when teammate Bo Bichette made the final out in the top of the ninth, leaving him without a shot at matching the big league record of four homers in a game.

Guerrero leads the majors with four homers in six games after topping the bigs with 48 last season.

Guerrero seemed like he'd have to leave in the second inning when his bare throwing hand was stepped on by baserunner Aaron Hicks. Guerrero had to reach across his body for Bichette's throw and placed his right hand down behind the first base bag to balance. Hicks stomped on it running out an infield single.

The fourth-year big leaguer immediately began waving the hand around, then walked toward Toronto's dugout as blood dripped onto his uniform and the turf. In a show of toughness sure to satisfy hockey-mad fans back in Toronto, Guerrero had trainer Voon Chong tape up his wound, then jogged back to first base a couple minutes later.

Guerrero was lobbying Montoyo to leave him in the game even before Chong figured out how to clean up the mess.

"I saw a lot of blood," Montoyo said. "Besides Vladdy, the trainers were kind of MVPs tonight."

With a dark red stain on the right thigh of his pants, Guerrero batted again in the top of the third and turned Cole's 98 mph fastball into a 427-foot, two-run homer and a 3-0 Blue Jays lead.

New York erased that deficit with homers by Rizzo and Judge and a tying double from DJ LeMahieu against Jose Berrios in the sixth. Springer responded in the seventh with an RBI single against Loaisiga.

Guerrero's first homer was nearly robbed in center by Hicks, who leaped above the wall and briefly had the ball in his glove. It fell out when Hicks hit the wall, bounced off something beyond the home-run barrier and fell back into play. A replay review confirmed the ball went out.

Jordan Romano pitched the ninth for his fourth save of the season. He's converted 27 straight chances.

Blue Jays outfielder Teoscar Hernandez left the field in pain after a groundout in the sixth and was removed from the game with left side discomfort. Montoyo said he'd get an MRI, and the team would know more Thursday.

Rizzo has three homers in six games. Judge and Torres each hit their first. Stanton's drive in the eighth would've tied it, but left fielder Raimel Tapia caught it with his back against the wall.

Cole struck out six in 5 2/3 innings, giving up three runs on Guerrero's homers. Three of the four hits against him were by Guerrero.

Blue Jays: Montoyo says Toronto may shift to a six-man rotation. RHP Ross Stripling could be plugged in to start Friday against Oakland.

Yankees: LHP Jordan Montgomery is expected to pitch as scheduled Friday at Baltimore despite taking a 103 mph comebacker off his left knee.