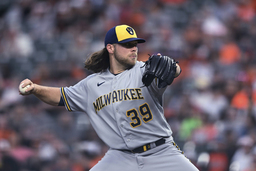 BALTIMORE (AP) Corbin Burnes certainly pitched well enough to earn his first win of the season, flashing the form that earned him last year's NL Cy Young Award during an overpowering start against the Baltimore Orioles.

Burnes threw seven shutout innings and failed to get the victory, but that didn't diminish the satisfaction the the shaggy-haired ace derived from Milwaukee's 4-2 win Wednesday night.

"Wins are one of those things that are out of my control," Burnes said.

More important is improving from start to start, and this outing was certainly better than his lackluster performance against the Cubs on opening day.

"It was better tonight," Burnes said. "I definitely have things to work on, but definitely a step in the right direction."

Burnes gave up three hits, struck out eight and walked one. Baltimore's only extra-base hit off Burnes - a leadoff double in the fifth inning by Rougned Odor - was followed by three successive strikeouts.

"He pitched beautifully," Brewers manager Craig Counsell said. "He looked really comfortable, kind of got everything going. So it was fun to see and fun to watch him pitch tonight."

Burnes left with a 2-0 lead, but Baltimore promptly tied it in the eighth against Devin Williams, who yielded a walk and hit a batter around an RBI single to Ryan Mountcastle.

Williams was replaced with the bases loaded, and Brad Boxberger (1-0) gave up a sacrifice fly to Trey Mancini before ending the inning with a strikeout.

Milwaukee bounced back in the ninth against Jorge Lopez (0-1). Hunter Renfroe singled and scored on Kolten Wong's liner into the right-field corner before Rowdy Tellez tacked on an RBI double.

Josh Hader worked the bottom half for his third save - one for each of Milwaukee's wins.

Milwaukee backed Burnes offensively with a two-run second against left-hander John Means. Keston Hiura opened with a walk before Tellez hit a two-out RBI double and scored on a single by Mike Brosseau.

Means was pulled after the fourth inning with left forearm tightness. He gave up four hits and retired the last seven batters he faced.

"There's not a ton of concern," Means said. "Honestly, I felt it last outing. I felt it on a curveball. Forearm started getting tight. I battled through it, and this week, it progressively got better throughout the week. I felt great in the bullpen and in the first two innings. In the third inning, I felt it again on a curveball. It was tight. I told them I could go back out there. I wanted to make sure."

Means and the Baltimore bullpen pitched well against the defending NL Central champions, but Burnes was better. After allowing three runs in five innings in Chicago last week, the 27-year-old righty rebounded with a dominant outing that helped the Brewers take the deciding game of the series.

Burnes closed out his 97-pitch effort by getting Austin Hays to hit into a double play in the seventh.

Orioles: After taking Thursday off, Baltimore opens a three-game series against the visiting New York Yankees in an AL East matchup on Friday night.