Lorenzen has strong Angels debut in 6-2 victory over Miami 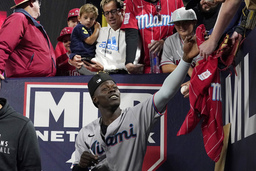 ANAHEIM, Calif. (AP) Michael Lorenzen had been looking forward to making his first start for his hometown team since signing with the Los Angeles Angels last November.

The right-hander made sure it was memorable.

Lorenzen allowed one run on two hits over six innings in his Angels debut as Los Angeles defeated the Miami Marlins 6-2 on Monday night.

"I'm not going to have this opportunity again. You only have your first start for your hometown team just once, so I went for it. Thankfully, it went my way," said Lorenzen, who struck out seven in his first start since 2020. "I just told myself to attack, attack, attack and you're either going to give up 10 homers or you're going to go deep into the game with a low pitch count."

Besides getting support from family and friends who were sitting in a suite, Lorenzen (1-0) got some help from his offense. Brandon Marsh hit a three-run homer in the first inning to give Los Angeles an early lead.

Jo Adell also went deep for the Angels, who bounced back after losing three of four to defending AL champion Houston in the season-opening series.

Jesus Sanchez accounted for both Marlins runs with a pair of solo homers. Miami manager Don Mattingly was ejected in the fourth for arguing with plate umpire Nick Mahrley.

Lorenzen, who grew up in Anaheim and went to Cal State Fullerton, signed a one-year contract with the Angels last November after seven seasons with the Cincinnati Reds. This is the first time since his 2015 rookie season that he's being counted on as a regular starting pitcher after primarily being used out of the bullpen the past six years.

It was the first time since July 9, 2015, also against the Marlins, that he went at least six innings.

Lorenzen's only costly mistake came in the fourth, when Sanchez drove a hanging cutter over the center-field fence.

Lorenzen (1-0) ended up using six pitches, throwing his sinker for strikes 20 of the 28 times he went to it.

"I loved every bit of his performance," Angels manager Joe Maddon said. "I've seen him a lot in the National League. I've never seen him dominate like that. He had that bowling-ball sinker working. That plays all the time. Righties don't like that at all."

Shohei Ohtani led off the Angels' first with a single and advanced to second with his first stolen base of the season. Max Stassi drew a walk with two outs before Marsh connected on Elieser Hernandez's fastball over the middle of the plate for a three-run drive to center.

It was Marsh's third big league home run, but first in the home confines of Angel Stadium.

Adell, who was 0 for 9 and struck out seven times in the season-opening series against Houston, led off the second with a shot to center to make it 4-0.

"I finally got in the swing of things," he said. "I was trying to do a little too much the first couple games."

"It took him a little bit to get going. Once he got his breaking ball and off-speed pitches going, he did a nice job," Mattingly said.

The Angels added a pair of runs in the eighth on RBI doubles by Marsh and Adell.

Angels slugger Mike Trout did not play due to a stomach issue that also affected him last week. Maddon said the All-Star outfielder was available off the bench if needed, but didn't want to risk starting him this early in the season.

Lorenzen's outing extended a great start to the season for the Angels' rotation. The starters have allowed only six earned runs in 24 1/3 innings. Opponents have a .155 batting average.

Mattingly was ejected for arguing about balls and strikes.

"I thought it was quick," he said. "It wasn't my first argument of the night. Usually you get a little more rope, but obviously not tonight."

Marlins: DH/OF Avisail Garcia was scratched from the lineup due to back tenderness. Mattingly said he didn't expect Garcia's injury to be serious, but it is possible he could also be held out Tuesday because Wednesday is an off day.

Angels: 2B David Fletcher came out in the seventh inning due to left hip tightness. ... OF Taylor Ward (left groin strain) is on track to come off the injured list when he is eligible to return this weekend, according to trainer Mike Frostad.

Angels: LHP Patrick Sandoval (3-6, 3.62) was originally slated to make his season debut last Friday against the Astros, but had his start pushed back due to arm soreness.