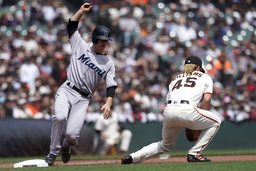 SAN FRANCISCO (AP) Heliot Ramos had two hits and scored a run in his major league debut, and the San Francisco Giants beat the Miami Marlins 3-2 on Sunday.

Mauricio Dubon added an RBI double for the Giants, who scored the decisive run in the third inning after a throwing error by Miami pitcher Trevor Rogers.

Jorge Soler had three hits and a walk for the Marlins. Joey Wendle singled twice and scored two runs.

Ramos, the 19th pick in the 2017 draft, was called up from Triple-A Sacramento before the game and greeted by a standing ovation as he stepped to the plate in the second inning. Wearing a pair of orange and black leopard-spotted cleats given to him by teammate Brandon Crawford, Ramos promptly singled and scored on Dubon's double.

"I don't think you can draw it up any better," Giants manager Gabe Kapler said. "A hit in your first at-bat kind of creates a little bit of confidence and swagger. He maintained that swagger throughout. He's been driving to this moment his entire life. He got here and took great advantage of it."

Ramos singled again in the fourth and struck out in the sixth.

"Best moment of my life," he said. "It was great. After I got the first hit I was more relaxed and it was pretty good, honestly. I've been waiting for this moment so I just went out there and played and do what I do."

Leading 2-1, the Giants got help from Miami's defense when Rogers fielded Austin Slater's comebacker and his throw pulled first baseman Garrett Cooper off the bag. After Darin Ruf doubled and Brandon Crawford struck out, Wilmer Flores hit a sacrifice fly to drive in Slater.

Jarlin Garcia (1-0) retired all six batters he faced. Dominic Leone pitched the ninth for his first save.

Jazz Chisholm Jr. drove in Miami's first run with a sacrifice fly. The Marlins scored again in the fourth when Cooper was hit by a pitch with the bases loaded.

Rogers (0-1), the runner-up for NL Rookie of the Year last season, allowed three runs and six hits in five innings.

Giants starter Anthony DeSclafani, who made his major league debut with the Marlins in 2014, allowed eight hits and two runs in 3 2/3 innings.

The Marlins got their leadoff hitter on base six times but only got two of the runners home.

Chisholm made a spectacular catch to rob Slater of a leadoff hit in the first inning. Slater lined an 0-2 pitch 105 mph but Chisholm - back in Miami's lineup after a day off - dove and caught the ball, drawing applause from fans of both teams. Soler also made a leaping catch at the fence in the fourth.

The Giants had their turn in the third when Jesus Sanchez led off with a single to right and took a wide turn rounding the bag. Slater threw behind the runner to Ruf at first base as Sanchez paused, then broke for second. Ruf threw to shortstop Brandon Crawford, who tagged Sanchez for the out.

"All of those plays are huge swings," Kapler said.

Marlins: Cooper exited with a bruised left wrist after getting hit by a pitch. Miguel Rojas replaced Cooper and played first base.

Giants: RHP John Brebbia was placed on the bereavement list.

Marlins: RHP Elieser Hernandez (1-3, 4.18 ERA in 2021) faces the Angels in the opener of a two-game series Monday. Hernandez is winless in five interleague starts.