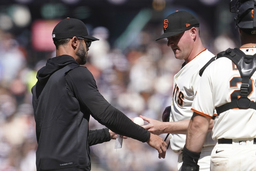 SAN FRANCISCO (AP) Jesus Sanchez hit a tiebreaking single in the seventh inning, and the Miami Marlins held on to beat San Francisco 2-1 on Saturday despite a strong outing from starter Carlos Rodon in his Giants debut.

The All-Star left-hander struck out 12 and allowed one run in five innings. His Ks are the most by a Giants pitcher through five innings since at least 1974.

"Anytime you face a guy like (Rodon) with that kind of stuff you just have to be disciplined in your approach and do what you can," said Miami second baseman Jon Berti, who singled and scored on a strange sequence in the third inning. "We not only have guys who can leave the ballpark but we also can scratch and claw our way too and play good defense. There is a lot of different ways we can win ballgames this year and today was one of them."

Rodon, who signed a two-year deal with San Francisco in March after spending the past seven seasons with the Chicago White Sox, generated 24 swinging strikes - tied for fourth-most by a starting pitcher through five innings in the pitch-tracking era (since 2008). He also made a strong defensive play in the fourth when he fielded Miguel Rojas' slow grounder, spun and threw to first base for the out.

"The idea was just to attack," Rodon said. "We're not going to waste pitches. We're going to attack, we're going to make them swing the bat and stay in the zone."

Miami starter Pablo Lopez, winless in six starts against the Giants, retired 14 of the first 15 and allowed one run in five innings with six strikeouts and one walk.

A day after losing their season-opener in extra innings, the Marlins sputtered offensively until scoring the game-winner against San Francisco's bullpen.

"We've changed some things offensively that we feel like we're going to score runs," Marlins manager Don Mattingly said. "Our guys haven't really gotten going yet but it's early. Over the course of the year our guys are going to get going."

Brian Anderson doubled and scored for the Marlins and Berti scored in the third after reaching on an infield single.

Berti advanced to second on a throwing error by third baseman Wilmer Flores after reaching first. After Berti took third base on a wild pitch, Jorge Soler struck out but the ball skipped past catcher Joey Bart, allowing Berti to score.

"Got to two strikes and just trying to put something in play," Berti said. "Fortunately, it got down the line pretty good and (I) got to second on the overthrow. Then just trying to be smart but aggressive on the bases."

Steven Duggar had an RBI double for San Francisco, and Thairo Estrada singled and scored a run.

Steven Okert (1-0) struck out all four batters he faced to win. Anthony Bender earned his first save after allowing a leadoff single in the ninth.

Giants catcher Joey Bart's home run on Friday was a milestone - the first San Francisco player to hit his first career home run on opening day since Will Clark in 1986. "It was good to finally get it," Bart said. "I feel like it's been a long time coming. Good to knock it out of the way and get the ball rolling."

Marlins: Berti started at second base in place of Jazz Chisholm Jr., who was held out because of the pitching matchup.

Giants: Opening day starter Logan Webb isn't expected to miss his next start after tweaking an ankle trying to make a play at first base on Friday. Manager Gabe Kapler said Webb will likely do more work on a stationary bicycle than normal in between starts.