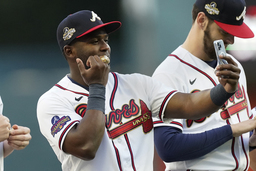 ATLANTA (AP) Kyle Wright has found his confidence, and the Atlanta Braves hope they have found renewed depth in their rotation.

Wright picked up a World Series ring along with many of his Atlanta teammates, then pitched two-hit ball over six scoreless innings to lead the Braves over the Cincinnati Reds 2-1 on Saturday night.

"I feel like I'm confident in myself," said Wright, who spent most of the 2021 season at Triple-A Gwinnett before he was promoted to allow one run in 5 2/3 innings in two World Series appearances against Houston.

"Using the World Series is a great way to boost that confidence," Wright said.

Atlanta won its second straight following an opening-day loss. Last year, the Braves didn't have a winning record until they were 57-56 on Aug. 8. They sprinted to their first title since 1995, capped by a six-game Series victory over the Houston Astros.

Wright (1-0) struck out six and walked one. He retired 10 consecutive batters before walking Tommy Pham to open the seventh.

"He just pitched," Reds manager David Bell said of Wright. "He has good stuff for sure, but he located his sinker, changed speeds and kept the ball down. Moved it all around. Really, he was in command and control of exactly what he wanted to do and executed a plan against us."

A.J. Minter got three straight outs, Darren O'Day pitched a perfect eighth and Will Smith got the save, allowing Tommy Pham's two-out walk and Joey Votto's RBI single before Aristides Aquino popped out.

Wright, a 26-year-old right-hander, enjoyed a strong beginning to what he hopes is a fresh start to his career. The fifth overall pick by Atlanta in the 2017 amateur draft, Wright had a 6.56 ERA in his first four seasons.

Snitker said Wright "figured out who he was" last season in the minors.

"It's great, kind of what you were looking for, what you thought he was capable of," said Snitker of Wright's performance against the Reds.

755 DIAMONDS AND A PEARL

The ring also includes a white pearl on the right side, a nod to the pearl necklace Joc Pederson wore last season.

"When they showed it to me, my jaw dropped open," Snitker said.

Former Braves first baseman Freddie Freeman, now with the Dodgers, will be presented his ring when Los Angeles visits Atlanta from June 24-26.

Olson was thrown out at the plate in the third and seventh innings. Shortstop Kyle Farmer's relay from left fielder Jake Fraley to catcher Aramis Garcia caught Olson in the third. Aquino's throw to the plate from left field nailed Olson, who tried to score from second on Ozuna's single, his third hit of the game.

The Braves acquired Olson from Oakland after realizing they would not be able to re-sign Freeman.

"If anybody wrote in the scouting report from Oakland that I'm fast, they lied," Olson said, smiling.

"That makes me feel a little better," Olson said.

Reds: RHP Lucas Sims could be ready to join the team within two weeks and allow another option as closer. Sims opened the season on the 10-day injured list after offseason health issues put him behind his normal spring training schedule. Sims is expected to start a rehab assignment with Triple-A Louisville next week. Bell said Sims could join the team as soon as April 20.

Braves: RHP Ian Anderson (9-5, 3.58 ERA in 2021) who left his last spring training start on Monday due to a blister on his right big toe, is not expected to have any limitations in his season debut on Sunday. ... C Manny Pina (sore left wrist) took batting practice and was available off the bench.

RHP Hunter Greene, the No. 2 overall selection in the 2017 draft by Cincinnati, will make his much-anticipated major league debut on Sunday when he faces Anderson in the series finale. The hard-throwing Greene, 22, was 10-8 with a 3.30 ERA last year at Double-A Chattanooga and Triple-A Louisville.