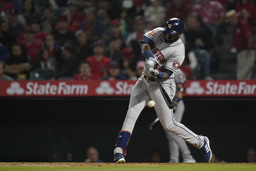 ANAHEIM, Calif. (AP) Noah Syndergaard and Justin Verlander spent most of the past two years working toward Saturday night, when their journeys back from Tommy John surgery coincidentally converged at Angel Stadium.

Although Syndergaard emerged slightly happier than Verlander, both veteran right-handers appear to be firmly on the right track.

Mike Trout and Jared Walsh homered in the Angels' first victory of the season. The Halos held defending AL champion Houston to two hits, with Raisel Iglesias' save capping 3 2/3 hitless innings from the bullpen.

Syndergaard (1-0) and Verlander (0-1) both performed impressively at the Big A, with Walsh's solo shot on Verlander's first pitch of the second inning eventually standing up as the difference.

Syndergaard yielded two weak singles and two walks over 5 1/3 innings. While the imposing right-hander known as Thor had just one strikeout, he induced 11 groundouts from the Astros' powerful lineup.

Syndergaard is wearing No. 34 again for the Angels, as he did for the Mets, but it has a special meaning in Anaheim.

It's also the number worn by Nick Adenhart, the promising Angels starter killed by a drunk driver a few hours after throwing six shutout innings at the Big A exactly 13 years ago Saturday. Syndergaard got the blessing of Adenhart's family to wear the number, which hadn't been worn by an Angels player since.

"The whole day I had goosebumps, because it was the 13th anniversary of Adenhart being tragically taken away from us," Syndergaard said. "I felt like an angel was by my side tonight. That was really special to me."

"It's a long road, man," Verlander said. "Lots of nervousness and anxiousness leading up to it. Felt like my debut. Got some things to work on, but coming out of it feeling pretty good."

Syndergaard was limited to two one-inning appearances - both late last year - for New York over the past two seasons while working his way back from surgery. He signed a one-year, $21 million deal with Los Angeles and emerged from spring training with a healthy arm and a determination to show he's back.

"It was fun to play behind (Syndergaard)," Trout said. "He was throwing strikes and trying to get back in the dugout as quick as he can. You saw it tonight. He was out there grinding."

Verlander had surgery in September 2020 and missed last season while recovering. Now 39, the two-time AL Cy Young winner looked capable of resuming his career at his customary elite level.

"He really knuckled down when he was in trouble," Houston manager Dusty Baker said. "He competes as well as anybody I've seen."

Verlander struck out Ohtani looking twice with inside pitches that painted the black, although both calls displeased the AL MVP. Verlander celebrated with a subtle fist-pump after he escaped a fifth-inning jam by fanning Ohtani and then retiring Trout on a flyout to strand two Angels.

"I think the stats made me look more comfortable than I am," Verlander said. "I think we'll have a lot of fun battles, him and I."

Verlander said he loved watching Ohtani playing both ways on opening day: "That was one of the most impressive, cool things I've seen in a long time. I got chills. ... It's awesome what he's doing. Just really impressive. I'm a big fan."

Trout's first homer since May 4 was a beauty, traveling 445 feet off a 98.8-mph fastball - the fastest pitch Trout has ever hit out of the yard - from Ryne Stanek. The three-time AL MVP missed the final 4 1/2 months of last season with a calf injury.

"Trout's gonna get you," Baker said.

Angels SS David Fletcher and Astros 3B Alex Bregman didn't start to rest. Fletcher flied out as a pinch-hitter in the seventh, and Bregman popped out in the ninth. ... Astros RHP Lance McCullers Jr. could start throwing next week, Baker said. McCullers' flexor tendon issue kept him out of spring training.