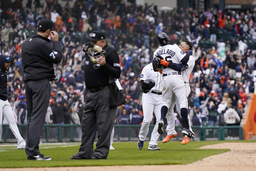 Baez wound up with a winning RBI single on a game-ending replay reversal in his Motor City debut, and the Tigers beat the Chicago White Sox 5-4 on Friday.

With two out after newly acquired Austin Meadows tripled, Baez hit a drive to right off Liam Hendriks that sent AJ Pollock back to the wall. Pollock appeared to make a juggling catch, but the ball struck the wall before going off the outfielder's glove.

The new-look Tigers started celebrating as they realized what happened, and the opening-day crowd joined in after umpire Marvin Hudson announced the reversal of the call.

In a quest to be relevant, the Tigers made a splash four months ago by signing Baez to a $140 million contract to add a desperately needed shortstop. They made many other moves, including acquiring Meadows in a trade from Tampa Bay on Monday after Riley Greene broke his right foot.

"They've added a couple pieces that makes their lineup significantly harder to pitch to," Hendriks said. "Two of those guys were the reason for the walk-off."

Eric Haase hit a solo homer off Hendriks (0-1) earlier in the ninth.

"With the moves made this year, the Tigers are here to win," Haase said.

Chicago's Andrew Vaughn hit a tiebreaking solo homer off Gregory Soto (1-0) in the top of the ninth.

The defending AL Central champion White Sox scored a run in the first inning and two more in the second against the Tigers, who were held scoreless until the sixth.

Miguel Cabrera's 2,988th career hit pulled Detroit into a 3-all tie in the eighth that didn't last long. Four pitches into the ninth, Vaughn hit a soaring shot just inside the left-field foul pole off Soto.

Hendriks was one of five pitchers that Hall of Fame manager Tony La Russa used in relief of Lucas Giolito, whose dominant day was cut short by injury.

The 6-foot-6 right-hander struck out six in four innings of one-hit ball before departing with abdominal tightness on his left side.

"I'm concerned because he felt something," La Russa said.

In his Detroit debut, lefty Eduardo Rodriguez started the game by striking out Pollock before giving up a pair of two-out walks and allowing a run on Eloy Jimenez's single.

The White Sox took a 3-0 lead in the second inning with more two-out runs on Pollock's single and Luis Robert's double.

Rodriguez gave up four hits, struck out two and walked two in four innings in his first game after signing a $70 million contract.

Pollock, acquired last week in a trade with the Los Angeles Dodgers for closer Craig Kimbrel, had three hits in his White Sox debut that will be remembered by the game-ending play.

"It was kind of a funky play," Pollock said. "I knew I caught it. I had no idea if it hit the wall first. Unfortunately, it didn't work out. Crazy game. I got smothered by the wall."

Meadows said it was "huge" for baseball to get back to business as usual after a 99-day lockout delayed the start of the season and COVID-19 kept fans out of the ballpark or limited the number that could attend games over the last two years.

"It's nice to just go out there and worry about baseball, and winning," he said.

To honor the late Kimera Bartee, the Tigers held a video tribute for the former first base coach and player, followed by a moment of silence. Bartee died in December. He was 49. Bartee's son, Amari, attended the game with family members and threw the ceremonial first pitch.

Tigers: Manager A.J. Hinch said LHP Andrew Chafin (groin) is ahead of RHP Kyle Funkhouser (shoulder) in coming back from the IL. Hinch said he doesn't expect Funkhouser to pitch this month.