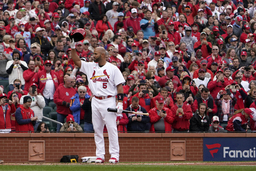 ST. LOUIS (AP) Albert Pujols held back tears during a lengthy standing ovation. The Cardinals designated hitter put on a big smile instead.

Plenty of reason for those on this opening day in St. Louis.

Adam Wainwright pitched six scoreless innings, Tyler O'Neill hit a three-run homer and drove in a career-high five, and the Cardinals celebrated Pujols' return with a 9-0 season-opening win over the Pittsburgh Pirates on Thursday.

"I was trying to hold it in a little bit," Pujols said. "These fans really appreciate what I've done for this organization and hopefully I can continue to do that and finish strong."

Yadier Molina threw out a runner trying to steal second in the first game of his final big league season, and Nolan Arenado and Tommy Edman also homered for the Cardinals, who won the managerial debut of 35-year-old Oliver Marmol. Paul Goldschmidt drew four straight walks, the first player to do that on opening day since Manny Ramirez in 2002.

The Pirates had just six hits and lost budding star Ke'Bryan Hayes to left forearm spasms in the first inning - just hours after news began to spread that Hayes had agreed to a $70 million, eight-year deal. Hayes said the issue was minor and not related to a wrist injury that spoiled his 2021 season.

Fans stood and cheered Pujols for nearly a full minute prior to his first at-bat, a flyout to left in the first inning. The 42-year-old played 11 seasons in St. Louis (2001-2011) and helped the Cardinals to a pair of World Series championships before leaving to join the Los Angeles Angels.

Pujols, who signed a one-year deal with St. Louis last month, was 0 for 5.

"He looked good, at least as far as his timing," Marmol said.

Added Wainwright: "The time that he was here (before), he was a franchise player. A guy who changed the game and was the face of baseball in St. Louis. To see him come back, to be a part of this clubhouse again, is really, really cool."

Wainwright (1-0) allowed five hits in his sixth opening day start and first since 2016. The 40-year-old struck out six and did not walk a batter. He and the 39-year-old Molina made their 305th start as a battery, fourth most in major league history. Molina made his franchise-record 18th successive opening day start.

O'Neill had an RBI single in the first, then broke the game open with a line-drive homer to left in the second inning against starter JT Brubaker (0-1) for a 4-0 lead.

"We're an offensive force," O'Neill said. "We have a lot of depth, one through nine. Everybody's dangerous. The DH helps a lot as well. We're always confident in ourselves."

Wainwright wriggled out of his only jam in the fourth by getting Kevin Newman to ground into an inning-ending double play with two runners on base. Wainwright has not allowed a run against Pittsburgh in his last 32 innings.

"I'm not trying to take away how amazing today was," Wainwright said. "But we still plan on getting that last out of the entire season."

The Cardinals recorded their largest opening day margin of victory since beating Houston 14-3 in 1982.

Yoshi Tsutsugo had two hits for Pittsburgh, which opened the season on the road for sixth successive season.

Brubaker, who was the Pirates seventh opening day starter in as many years, allowed four runs over three innings. He struck out two and walked three.

Pregame ceremonies featured the traditional parade of Clydesdale horses circling the field in addition to the introduction of 16 members of the St. Louis Cardinals Hall of Fame. Ozzie Smith threw out the first pitch to Willie McGee.

Pirates: RHP Duane Underwood Jr. left the game in the sixth with right hamstring tightness. ... OF Greg Allen was placed on the 60-day injury list with a left hamstring issue.

Cardinals: Opening the season without RHP Jack Flaherty, who is sidelined with shoulder stiffness.