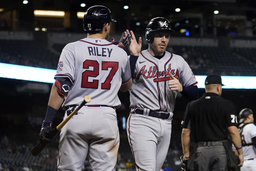 PHOENIX (AP) Austin Riley was smacking baseballs all around Chase Field on Monday night. Adam Duvall hit one so hard it left the yard by a long, long way.

The Atlanta Braves have ridden the ups and downs of a playoff race for weeks now. It's safe to say this was definitely one of the good days.

Riley had three doubles and three RBIs, Duvall added a two-run homer projected at 483 feet and the Braves extended their lead in the NL East by beating the Arizona Diamondbacks 11-4.

"It was nice to have an offensive game," manager Brian Snitker said. "We've been waiting for that. It's good to see the guys bang the ball around a little bit."

The Braves pushed their advantage to three games over the Philadelphia Phillies, who lost 2-0 to Baltimore. Atlanta had lost four straight before beating the Giants on Sunday.

"You're going to run through ruts. You can't look forward, you have to stay in the moment," Riley said. "We've got a really good team and I believe in us."

The two worst teams in the majors this season are currently having a big effect on the NL East race. The Orioles and Diamondbacks have both lost 102 games.

The Diamondbacks led 3-2 heading to the fifth but the Braves responded with a huge inning, scoring seven runs while sending 12 batters to the plate.

Jorge Soler and Freddie Freeman started the rally with back-to-back doubles, Riley added his third double of the night and Duvall crushed a 483-foot homer to left-center, which was his 37th long ball of the season and 150th of his career. The Braves also took advantage of two Arizona errors.

"We just didn't attack the zone, didn't pick up the baseball. It was a very sloppy fifth inning," Arizona manager Torey Lovullo said.

Riley continued a breakout season, pushing his batting average above .300 with three hits. The 24-year-old third baseman has been a mainstay in the middle of Atlanta's order, contributing 30 doubles and 29 homers.

Duvall has also added plenty of punch since coming to the Braves in a midseason trade with the Marlins. His 37 homers are a career high, and 15 of them have come with Atlanta in just 163 at-bats.

Riley was on second base when Duvall hit his rocket into the left-center stands. Riley never even bothered to turn and see where it landed.

"That ball tonight was hit a very, very long way," he said.

Huascar Ynoa started on the mound for the Braves, giving up three runs over four innings. Jacob Webb (5-3) pitched a scoreless inning of relief. Eddie Rosario added a solo homer.

The Diamondbacks continued a miserable season that is among the worst in franchise history. The team's single-season record for losses is 111 set in 2004. Arizona must win at least four of its final 12 games to avoid tying or breaking that mark.

Lovullo said it's been tough watching his team struggle to execute in critical moments.

"I'm dying on the inside," Lovullo said.

PITCHER IN A PINCH

The Braves used pitcher Max Fried as a pinch hitter in the fifth inning. He coaxed a seven-pitch walk from Taylor Widener.

Fried has been an excellent hitter this season, particularly for a pitcher, batting .306 with three doubles in 49 at-bats. It was his fourth appearance as a pinch hitter in 2021.

The Diamondbacks called up Mejia from Triple-A Reno so he could start. To make room on the roster, they optioned RHP Brandyn Sittinger to Reno following Sunday's game.