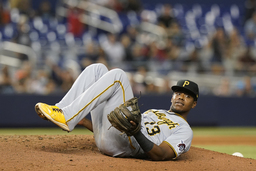 MIAMI (AP) Ke'Bryan Hayes doubled twice and survived a ninth-inning tumble on the pitcher's mound in the game's second failed attempt to catch a poup, helping the Pittsburgh Pirates beat the Miami Marlins 6-3 Saturday night and move within a win of their first series sweep this year.

Miami catcher Nick Fortes homered and singled in his major league debut, a night after Payton Henry was behind the plate for the Marlins in his debut. They became the first teammates to debut as starting catchers on consecutive days since the St. Louis Browns' Joe Jenkins and Jack Enzenroth on April 30 and May 1, 1914, according to STATS.

Cole Tucker had three hits for the Pirates and Bryse Wilson (3-7) allowed two runs and four hits in five innings. Wilson had been 0-4 with a 5.09 ERA in seven starts since the Pirates acquired him from Atlanta July 30.

"For me and my personal situation, the Pirates traded for me so for the rest of the season I'm trying to prove to them that they made the right decision," Wilson said. "I just want to come out every time and show them that I am what they thought what I was."

Pittsburgh, last in the NL Central at 56-92, is assured of winning four straight series for the first time this year.

The Pirates have been swept in 16 series this season. They have have not swept a series since winning two games at St. Louis on Aug. 27 last year in a makeup doubleheader on what originally had been an off day.

"Every day we come in, we're not looking at our record," Hayes said. "We're just trying to continue to play good baseball, continue to get better at the things we're working on every day."

Miguel Rojas singled leading off the ninth and Chasen Shreve relieved. After a pair of outs around a walk, Lewis Brinson hit an infield popup and Hayes ranged from third onto the pitcher's mound, overran the ball and tumbled back off the mound as the ball fell for a single.

"I thought it was going to be on the other side of the mound and once I realized that it wasn't I tried to reach back but I didn't end up catching it," Hayes said.

Shreve struck out Lewin Diaz for the final out.

"Our bullpen was good again," Pittsburgh manager Derek Shelton said. "Chase came in and shut the door. He's been really good the last month or so and really consistent. It was a big bonus for us because we had some guys down that normally pitch on the back end of our bullpen that weren't available today."

After pitching into the seventh inning against Washington in his debut on Aug. 25, Cabrera, who finished with seven strikeouts, has not lasted beyond the fourth in his last four starts.

"We're going to see a bumpy road, sometimes it's going to look and sometimes it's not," Miami manager Don Mattingly said of Cabrera. "Tonight he got the ball down in areas that he needed to against that club and got some strikeouts."

Pittsburgh increased its lead to 3-0 in the fourth when Tucker tripled and was thrown out at the plate by Diaz on Wilson's grounder to first, Hayes doubled and Kevin Newman hit a popup to right to a single that hit off the glove of right fielder Jesus Sanchez, who charged into second baseman Jazz Chisholm.

Hoy Park's two-run triple against Sean Guenther made it 5-0 in the fifth.

Fortes singled up the third for his first big league hit and the 24-year-old hit a two-run homer in the fifth off a sinker, a 413-foot drive to left-center. Fortes became the eighth Marlins player to homer in his first game.

"I was going up there and trying to hit a ball hard and trying to get myself into the swing of playing baseball and realizing it's the same game," Fortes said. "It's been a long two days but today was definitely filled with a lot of emotions. I've been soaking it in, every single second and every moment being here."

Tucker's two-out RBI single boosted the lead to 6-2 in the seventh.

In his two previous appearances against Miami, Wilson was the beneficiary of 40 runs. While with the Braves, Wilson was on the mound in 29-9 and 11-1 victories.

"Personally, I love pitching against the Marlins," Wilson said. "My stuff matches up good against theirs and I seem to get a lot of run support. But it's awesome to see these guys come out every day and consistently swing the bat."

With the addition of Fortes and Henry, the Marlins have four catchers on their roster. Sandy Leon and Alex Jackson are the other catchers the club can use in their remaining 14 games.