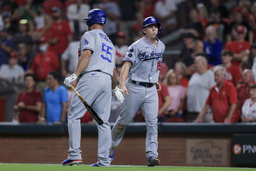 "We were playing a high quality team," Castillo said through an interpreter. "It felt like a playoff game. Because of that, I was focused today. I felt a lot of adrenaline with the fans behind me."

The Reds have dropped their last seven series to slip to fourth in the NL wild-card standings, a half-game behind San Diego and a full game behind second-place St. Louis.

The Dodgers, already assured at least a wild-card spot, began the day one game behind San Francisco in the NL West.

Castillo (8-15) didn't allow a runner past second base in 6 1-3 shutout innings. He threw a season-high 111 pitches and gave up five hits and two walks.

"I told Luis that I've seen him pitch a lot of great games, but tonight was my favorite," Reds manager David Bell said.

Dodgers manager Dave Roberts said Castillo featured a fastball and changeup and mixed in a changeup.

"We chased at times and expanded when we shouldn't have," he said.

"Regardless of how we're going, Castillo is going to present challenges," Roberts added. "We knew runs were going to be hard to come by tonight.,"

Reds reliever Luis Cessa went 1 2-3 scoreless innings. Michael Lorenzen allowed Matt Beaty's RBI single with two outs in the ninth before getting pinch-hitter Albert Pujols to fly out for his fourth save.

Buehler (14-4) was hoping to notch his career-high 15th win, but the Reds reached him for three runs on six hits and two walks in six innings.

The Reds broke through against Buehler in the fifth after Farmer led off with a double. Tucker Barnhart hit an RBI single and excitedly clapped his hands and pointed at the Cincinnati dugout to celebrate.

Nick Castellanos and Joey Votto hit back-to-back singles with one out in the sixth and they both scored on Farmer's double.

"It was a big win, obviously," Farmer said. "I love a lot of guys over there. They are great friends of mine, but it is fun to play them."

The Dodgers narrowly avoided what would have been their sixth shutout loss of the season.

Dodgers: Gavin Lux was scratched before the game from his start in left field with what Roberts described as a right forearm contusion suffered when a ball got away from a pitching machine. X-rays were negative, Roberts said. Beaty replaced Lux in the lineup.

Reds: OF Jesse Winker (intercostal strain) was activated from the 10-day injured list and OF Tyler Naquin (bruised ribs) was placed on the injured list. Winker made his 17th career start and first appearance since 2019 in center field.

Reds: RHP Sonny Gray (7-7) has limited Dodger batters to a combined .130 batting average and has a 2.18 ERA against Los Angeles, but he is 1-2 in three career starts.