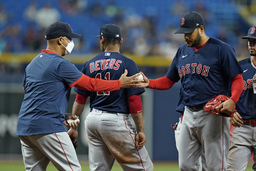 Rodriguez pitched four-hit ball into the seventh inning, and the Red Sox beat Tampa Bay 4-0 on Thursday night for a split of their four-game series with the AL East-leading Rays.

Garrett Richards replaced Rodriguez (11-7) with two on and no outs in the seventh, and the right-hander escaped the jam with a pair of strikeouts and a fly ball. Richards earned his second save, finishing a five-hitter.

Manager Alex Cora said Sale talked with his teammates before the game.

"He's been saying all along, nothing is going to stop us," Cora said. "He's been very loud in the clubhouse just letting them know it doesn't matter what's going on, we've got to keep pushing, we're going to be OK. There was a lot of energy today. The guys were into it from the get-go, and to be able to do that is a testament to them."

The Red Sox reported no new COVID-19 cases. Eight Boston players, including star shortstop Xander Bogaerts, and two coaches have either had a positive test or were considered close contacts since last Friday.

"It was a good day today," Cora said. "Nothing to report. Guys are feeling OK, feeling better. Now we've just got to be patient."

Rays rookie Wander Franco extended his on-base streak to 33 games with a seventh-inning walk, but he left after the at-bat with a headache. He tied Hall of Famers Mel Ott and Arky Vaughan for the third-longest streak by a player under 21.

Franco was checked by a trainer after pointing toward his head several times earlier in the plate appearance.

"We're going to monitor for concussion symptoms to see what we get," Tampa Bay manager Kevin Cash said.

Franco was tagged out by catcher Christian Vazquez trying to score from third on a grounder Wednesday night.

"Didn't look that severe at the time, but maybe there's some carryover," Cash said. "We really don't have many answers quite yet."

Bobby Dalbec drove in two runs for Boston, which has a two-game lead over Oakland in the race for the second AL wild card.

Tampa Bay's Shane McClanahan (9-5) gave up four runs and eight hits in five innings. The rookie left-hander had won five straight starts. He allowed three runs or fewer in each of his previous 13 outings.

Boston opened a 2-0 lead on two-out RBI singles by Dalbec in the first and Hunter Renfroe in the second.

J.D. Martinez hit a run-scoring single before Dalbec connected on another two-out RBI single as Boston went up 4-0 in the fifth.

The Red Sox lead the majors with 284 runs scored with two outs. Dalbec has driven in 23 runs over his last 21 games.

Rays: RHP Chris Mazza, optioned to Triple-A Durham on Aug. 28, was placed on the COVID-19-related IL. ... 1B Ji-Man Choi (strained left hamstring) is scheduled to play Friday and Saturday for the rookie-level FCL Rays.