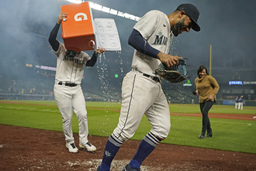 SEATTLE (AP) Abraham Toro hit a grand slam against a player he was traded for last month, connecting in the eighth inning and sending the Seattle Mariners over the Houston Astros 4-0 on Tuesday night.

Toro's homer came off former Mariners reliever Kendall Gravemen - they were both part of a four-player swap on July 27.

The Astros rallied Monday night against Joe Smith, who also was part of that trade, for a 4-3 win. Toro turned the tables the next night with his first career slam.

"That was Major League Baseball in 2021 at its finest," Mariners manager Scott Servais said.

Graveman (5-1) walked J.P. Crawford to start his rugged return to T-Mobile Park. After striking out Mitch Haniger, he gave up a single to Kyle Seager and then hit Ty France to load the bases and bring up Toro in an at-bat loaded with meaning for the young player.

Toro responded with his third home run against the Astros since being dealt. The second baseman said he had an inkling something big was coming.

And that he did, but that's not the pitch Graveman wishes he had back.

"The walk and the HBP is really what led to the inning," Graveman said. "... I think the hit by pitch was the bigger one. That was a mistake against Ty France."

Houston starter Lance McCullers Jr. and relievers Luis Garcia and Blake Taylor had retired 10 straight going into the eighth. Five of the six runs Graveman has given up since joining the Astros have come against his former team.

Yusei Kikuchi pitched seven sharp innings for Seattle, allowing four hits and striking out four. Paul Sewald (9-3) gave up a double to Jose Altuve in the eighth, but struck out three to get the win.

Kikuchi pitched beyond the sixth inning for the first time since July 1. He helped himself with a seven-pitch fifth inning that included a strikeout. And an eight-pitch seventh inning included a double play after Alex Bregman's leadoff single.

Kikuchi also outsprinted Yuli Gurriel to the first-base bag to complete a groundout and the inning in the sixth, stranding Carlos Correa at second.

Kikuchi had lost four of his previous five decisions, giving up seven runs to the Astros in their last meeting on Aug. 20. It was his 14th quality start.

"Tonight it was all about the heater," Servais said. "... He was on the attack from the get-go tonight and he needed to be."

McCullers Jr. gave up four hits over five innings with three strikeouts and three walks. He got out of bases-loaded jams in the first and fourth innings, but was pulled after 102 pitches.

France set the Mariners' franchise record when he was hit by a pitch for the 20th time this season.

The Astros signed veteran catcher Drew Butera to a minor league contract and he's expected to join Triple-A Sugar Land this week. Butera has played in parts of 12 major league seasons, most recently starting 12 games for the Los Angeles Angels in May. He spent most of the season with Triple-A Salt Lake.

Mariners: RHP Diego Castillo (right shoulder inflammation) is scheduled to make a rehab appearance at Triple-A Tacoma on Thursday, manager Scott Servais said. Castillo has been out since Aug. 20.

Astros: RHP Jake Odorizzi (6-6, 4.46) looks for his third straight win in the series finale against Seattle.