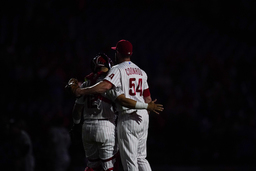 Jean Segura and Odubel Herrera homered for the Phillies, who entered play 5 1/2 games behind the first-place Atlanta Braves in the NL East. Eight of Philadelphia's 12 hits went for extra bases.

Bryce Harper doubled and drove in a run, Segura had three hits and Gregorius had a pair of RBIs.

"When you have more than one or two guys (hitting) and you have five or six like tonight, that's when you put up big numbers," Phillies manager Joe Girardi said.

Gibson (10-5) allowed three hits, struck out three and walked none. The 33-year-old right-hander is 4-2 with a 3.16 ERA in six appearances, five of them starts, since the Phillies acquired him from Texas at the trade deadline.

"He has such a feel for pitching," Girardi said. "He doesn't beat himself, goes about his business the right way and always is prepared."

Jose Alvarado, Hector Neris and Sam Coonrod finished the shutout by combining to allow one hit with six strikeouts in three innings in relief.

Herrera led off the first with a double, Segura singled and Harper had a sacrifice fly off Humberto Mejia (0-1).

The first of Gregorius' two RBI doubles made it 2-0 later in the inning. Gregorius also had three doubles one other time, on Sept. 22, 2014.

"Any time a solo homer or two-run homer doesn't beat you, you have a lot more confidence and freedom to go about your game plan," he said. "You're not worried about one swing. I was able to be aggressive."

Herrera and Segura hit back-to-back homers in the third.

Mejia, a 24-year-old rookie making his second start this season and fifth of his career, settled down after the shaky beginning. He exited after six innings, allowing four runs on eight hits with three strikeouts and a walk.

"Early on he was working into his outing; once he got to that point, he became very effective," Diamondbacks manager Torey Lovullo said. "He did a great job and gave us that (bullpen) coverage that we needed. It turned out to be a pretty darn good outing. There were some mistakes early, some hard-hit balls. Early on he was dancing around the strike zone and eventually got real crisp."

Harper upped his RBI total this month to 21 and also showed some frustration in the fifth when he slammed his helmet hard to the ground beyond first base after grounding out to end the frame.

Diamondbacks: RHP Luke Weaver has cleared COVID-19 protocols and can resume rehabbing. Weaver (right shoulder strain) has been out since May 16. He is 2-3 with a 4.50 ERA in eight starts.

Phillies: C J.T. Realmuto was not in the lineup. He was scheduled to have Friday off but was pressed into duty when C Andrew Knapp was placed on the COVID-19 injured list about 45 minutes before the scheduled game time. After Friday's game, Segura hinted that Realmuto was dealing with a shoulder issue. Girardi downplayed that assessment prior to Saturday's game, indicating that it was just a day off for his catcher who is experiencing normal wear and tear.

Arizona LHP Madison Bumgarner (7-8, 4.17) is scheduled to face Phillies LHP Ranger Suarez (5-4, 1.46) in the conclusion of the four-game set on Sunday afternoon.