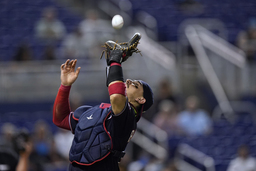 De La Cruz increased his batting average to .353 since Miami acquired him from Houston on July 30. Miguel Rojas also went deep and Brian Anderson had two hits and two RBIs for the Marlins, who won their second straight after snapping an eight-game losing streak Wednesday.

"I'm feeling much better, getting my timing like I had in Triple-A," De La Cruz said. "Thank God, I'm adapting."

"He was making pitches tonight," Miami manager Don Mattingly said. "I thought he was sharp. It was good to see."

Washington's Juan Soto hit his 21st homer, a two-run shot. The blast was measured at 114 mph, the hardest hit in the young slugger's career.

Alfaro capped a four-run first inning with his three-run drive against starter Patrick Corbin (7-13). Alfaro hit Corbin's slider over the wall in center for his fourth homer of the season. The Marlins took a 1-0 lead on Anderson's RBI single.

"The timing at the plate is one thing and I think I'm starting to get my timing back," said Anderson, who spent two months on the injured list before being activated July 24. "That's a good sign for me."

Rojas' two-run shot in the second, his seventh of the season, increased Miami's advantage to 6-0.

Marlins center fielder Lewis Brinson was removed because of a left thumb sprain in the fifth. Brinson collided with left fielder De La Cruz as both unsuccessfully attempted to catch a flyball hit by Alcides Escobar in the fifth.

Escobar reached second after the ball was jarred from De La Cruz's glove, and Brinson was charged with an error. Soto followed with his shot over the center field wall.

Bleier hit Carter Kieboom before Dylan Floro came in to retire pinch hitter Riley Adams on a flyout to right for his sixth save.

The Nationals loaded the bases in the fourth on one-out singles by Yadiel Hernandez, Kieboom and Luis Garcia. But Elieser Hernandez struck out Tres Barrera and retired pinch-hitter Lane Thomas on a pop out to catcher Alfaro.

"If he wasn't coming up to hit that inning and the bases weren't loaded I probably would have left him in the game," Washington manager Dave Martinez said. "But the fact of the matter dictated we had to pinch hit for him."

Escobar had his own cheering section in the stands. Escobar's 7-year-old son plays in a local youth baseball team and the entire group sat near the Nationals dugout and cheered whenever the Nationals shortstop was introduced. The cheers grew even louder after Escobar's two hits.

"That's awesome whenever you have kids and get them involved during a game," Martinez said. "It means a lot not just to Alcides but all the players to see young kids cheering for everyone and having a good time."

Nationals: RHP Paolo Espino (3-4, 4.28) will start the opener of a three-game series at the New York Mets on Friday.

Marlins: RHP Zach Thompson (2-5, 2.97) will start the opener of a home series against the Cincinnati Reds on Friday.