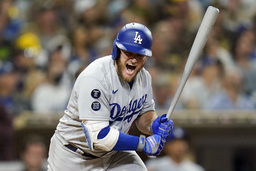 SAN DIEGO (AP) AJ Pollock hit a two-run single and robbed Manny Machado of a two-run homer to lead the Los Angeles Dodgers past the sinking San Diego Padres 5-2 on Tuesday night in a series opener between NL West rivals headed in opposite directions.

"Since the break, AJ has played as good as anybody," Dodgers manager Dave Roberts said. "He has just been a really good player. He has been one of our most consistent performers in the second half."

Will Smith homered for Los Angeles, and Julio Urias (14-3) allowed one hit over five scoreless innings in his return from the injured list to match Chicago Cubs right-hander Kyle Hendricks for most wins in the majors.

"I felt really good," Urias said through a translator. "I followed the game plan."

The surging Dodgers, who have won 10 of 11, stayed 2 1/2 games behind first-place San Francisco in the NL West.

San Diego has lost 10 of 12 and remained a game behind the Reds for the league's second wild card.

"Just as a group, we aren't swinging it like we are capable of," Padres manager Jayce Tingler said.

Urias, who missed his previous turn with a bruised left calf, held the Padres hitless until Eric Hosmer doubled with one out in the fifth.

"Urias is one of the top guys in the league. Coming off the IL he looked pretty fresh. We weren't able to get much off him," Tingler said. "He mixed it up early on. He had all the pitches going."

In a bullpen game for San Diego - which is becoming more common with the starting rotation in disarray - middle reliever Pierce Johnson (3-3) got the start. After retiring the side in the first inning, Johnson gave up Smith's home run leading off the second.

"Our pitchers, our bullpen did a really good job," Tingler said.

Padres reliever Daniel Camarena, just called up from Triple-A EL Paso, gave up two runs in the seventh on three Dodgers hits. The big blow was the two-run single by Pollock with the bases loaded through the right side.

"He had a big night," Tingler said. "Pollock did a good job."

Los Angeles made it 5-0 in the eighth against Reiss Knehr. Trea Turner doubled, stole third and scored on a sacrifice fly by Justin Turner. Later in the inning, Corey Seager drove in Max Muncy with another sacrifice fly.

Jurickson Profar hit a two-run homer off Corey Knebel in the bottom half. Blake Treinen struck out Jake Cronenworth with two on to end the inning.

San Diego also put two runners on in the ninth before Kenley Jansen struck out Adam Frazier for his 28th save.

San Diego's best chance to take the lead came in the fourth. With a runner aboard, Machado hit a towering drive to left field but Pollock timed his jump perfectly and caught it about a foot above the wall.

"The last time I tried to grab a homer, I embarrassed myself. I didn't want to jump late and run into the wall," Pollock said. "You don't get too many opportunities like that where you have a catchable ball over the wall."

The Padres lead the 19-game season series 7-4, including a three-game sweep in late June at Petco Park. Los Angeles ended a four-game losing streak to San Diego, its longest since 2010. The Dodgers have won the season series for 10 consecutive years.

Padres RHP Yu Darvish threw his third bullpen since exiting an Aug. 12 start with lower back tightness. Darvish also took fielding practice afterward. "We're getting close," Tingler said. ... RHP Dinelson Lamet (right forearm inflammation) began a rehab stint with Class A Lake Elsinore. Lamet was nearing a mid-August return when he had a setback because of an infection in his hip.