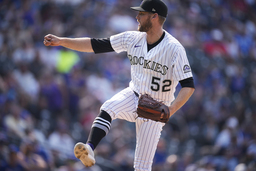 DENVER (AP) Trevor Story hit two home runs, including a go-ahead two-run drive in the fifth inning, and the Colorado Rockies hung on to beat the Chicago Cubs 6-5 on Thursday.

Sam Hilliard and Connor Joe also homered and Brendan Rodgers extended his hitting streak to 12 games with two singles for the Rockies, who took two of three from the Cubs.

Willson Contreras hit a two-run double in Chicago's four-run fifth. The Cubs concluded their six-game trip with a 2-4 mark after a series of trade deadline deals that saw the departure of stalwarts Anthony Rizzo, Kris Bryant and Javier Baez.

Rodgers started the fifth with a single off Jake Jewell (0-1) and Story - who was the subject of trade rumors leading up to the deadline - followed with his second homer of the day and 15th this season to put the Rockies ahead 6-4. The opposite-field shot gave him his second multi-homer game this season and 17th of his career.

"Trev's obviously just been a little bit off this year, as we know," Rockies manager Bud Black said. "But games like today can get a guy going. That home run to right was smoked and that homer to left was clicked pretty good, too. I think we're going to see the best of Trev here in the next couple of months, I really do."

Story said the passing of the trade deadline at least settled his short-term future, allowing him to focus his attention on the field.

"Yeah, I think I'm in that mode," he said. "I think it's a lot easier to do that now that those things have passed. That's what it's all about for me, playing this game because I enjoy it. I think that's when I'm at my best."

The Cubs pulled within a run in the sixth on David Bote's double and Frank Schwindel's RBI single off Tyler Kinley (2-2), but the Rockies bullpen shut down the Cubs the rest of the way. Daniel Bard got the last three outs for his 17th save.

Antonio Senzatela, reinstated from the COVID-19 list before the game for his first start since July 7, was strong early before wavering in the fifth. He struck out six consecutive Cubs batters spanning the second and fourth innings.

The Cubs' outburst in the fifth included an RBI single by Rafael Ortega, a two-run double by Contreras and a two-out RBI single by Ian Happ that evened the score at 4-all and chased Senzatela.

Chicago starter Jake Arrieta allowed four runs in four innings, his fourth consecutive start in which he has thrown four innings or fewer. He gave up three home runs, all solo shots, among the nine hits he allowed.

"The homers were solo homers, but still just made a couple of mistakes in counts that I could have been a little better in," Arrieta said. "But I felt good. We did a nice job of coming back and tying the ballgame. That was really nice to see and then they were able to score enough to put it away."

Rockies: Senzatela, who was placed on the COVID-19 list on July 16, made one rehab start, pitching four scoreless innings with the Arizona League Rockies a week ago. Colorado also reinstated RHP Yency Almonte from the COVID-19 list. LHP Zac Rosscup was returned to Triple-A Albuquerque and INF Rio Ruiz was optioned to Albuquerque.