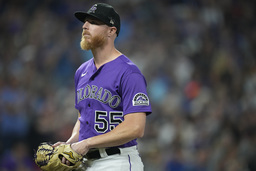 DENVER (AP) Patrick Wisdom hit a three-run double to back a solid outing from Alec Mills and lead the Chicago Cubs past the Colorado Rockies 3-2 on Wednesday night.

Mills (5-4) overcame a rocky start to pitch six innings for his first win since July 7. Wisdom finished with three hits.

Manuel Rodriguez gave up a two-out single in the ninth but got Sam Hilliard on a comebacker to earn his first career save.

"It's nice when you have a guy that throws that hard and the ball moves that much. Picks up a big save for us," Cubs manager David Ross said. "That was a nice outing from Manny."

Raimel Tapia had two doubles and nearly made a run-saving catch for Colorado.

Rockies starter Jon Gray (7-7) walked one batter over six innings and it came back to hurt him. After getting the first two outs of the fifth he gave up consecutive singles to Rafael Ortega and Willson Contreras and then walked Ian Happ, a .177 hitter, to load the bases.

Wisdom hit a ball to the wall in left field that Tapia had in his glove, but it fell out when he hit the fence, allowing all three runners to score.

"I feel bad. I should have had it," Tapia said through a translator.

Wisdom made a bid for his 17th homer but fell just short.

"I didn't square it up flush like a no-doubter, but I knew we were in Colorado and some weird things can happen," he said.

Gray has pitched well since returning from the 10-day injured list on June 25. He was 3-0 with a 2.61 ERA in his previous seven starts and came within a pitch of tossing six shutout innings.

"I don't know if I got a little lazy with what I was throwing, but if we throw a fastball there we probably get him out," Gray said about Wisdom's double. "I wasn't attacking the zone, I felt like. A lot of hits, a lot of traffic."

Colorado got both its runs in the first, on back-to-back doubles by Tapia and Brendan Rodgers to open the inning followed by a wild pitch and a groundout.

Rockies: Manager Bud Black said LHP Kyle Freeland was feeling fine a day after getting hit on the left foot with a line drive. Black said it was too early to know if Freeland would make his next scheduled start.

All but the top of the first inning was played with three umpires after plate ump Kerwin Danley left the game due to back spasms. Danley was noticeably limping as he walked slowly to the exit behind home plate with the help of Rockies trainers to receive medical treatment

Roberto Ortiz moved from second base behind home plate for the rest of the game.

Danley will not work Thursday afternoon's game, the Rockies announced.

Left fielder Johneshwy Fargas made his Cubs debut and showed why he was claimed off waivers from the New York Mets. With the Rockies leading 2-0, Ryan McMahon led off the fourth with a double and tried to tag up when Elias Diaz flied out to left. Fargas threw a one-hopper to Wisdom, who tagged out McMahon.

Chicago RHP Jake Arrieta (5-10, 6.20 ERA) will make his second start since returning from the 10-day injured list. Colorado is expected to activate RHP Antonio Senzatela (2-8, 4.58) after a stint on the IL due to COVID-19 protocols.