Rays get Nelson Cruz in trade, rally to beat Indians in 10 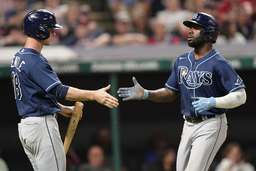 Hours after adding slugger Nelson Cruz to their lineup in a major trade, Tampa Bay stormed back for a 5-4 win over the Cleveland Indians on Thursday night with Austin Meadows delivering an RBI single in the 10th inning.

Meadows' one-out liner on an 0-2 pitch from Bryan Shaw (3-4) brought home Randy Arozarena from second base.

It was the second straight game-winning hit for Meadows, who had a two-out, two-run single in the ninth to beat Baltimore on Wednesday.

It was also the 30th come-from-behind victory this season for Tampa Bay.

"It seems like everyday there's a new hero," Meadows said. "It feels like momentum is always on our side."

Down 4-2 in the ninth, the Rays rallied to tie it against closer James Karinchak on a leadoff homer by Yandy Diaz and Brandon Lowe's clutch double with two outs.

Pete Fairbanks (3-3) pitched the ninth and Diego Castillo struck out Franmil Reyes and Bobby Bradley with the potential tying run at third in the 10th for his 14th save.

The Rays announced their acquisition of Cruz just before the first pitch.

Needing a big bat for the playoff push, Tampa Bay got a potent one from the disappointing Twins.

"We're definitely getting a high-quality hitter and a high-quality person," said Rays manager Kevin Cash, who has known Cruz for years and recently managed him in the All-Star Game. "There's guys that can naturally hit and he does it."

Reyes made Tampa Bay pay for a curious strategy by hitting a three-run homer while helping the Indians take a 4-1 lead, but Cleveland's bullpen collapsed with Karnichak giving up two runs in the ninth.

"Unfortunately, failure is a part of the game," Karinchak said. "You know that coming in. But I'm going to keep trusting the process, keep sticking to myself and keep working on it every day and believing in myself.

"Unfortunately there's bumps in the road, but you keep on board."

Reyes connected off Luis Patino in the third inning after Cash inexplicably had the right-hander intentionally walk struggling Jose Ramirez (hitless in his last 11 at-bats) with two outs to face Cleveland's dangerous DH.

In the third, Reyes, who hit a walk-off, three-run homer to beat Kansas City in a similar situation on July 8, lined a 1-2 pitch over the wall in left field for his 17th homer - and sixth in 13 games since being activated from the injured list.

As he rounded third, Reyes defiantly shook his index finger as if to warn the Rays about challenging him.

With two off days coming next week, the Indians sent rookie Eli Morgan back to Triple-A Columbus temporarily and recalled rookie left-hander Sam Hentges to bolster their bullpen.

Morgan pitched well in Wednesday's win at Houston, allowing three runs and three hits in five innings. The Indians are impressed with the 25-year-old's development.

"The kid has some guts," manager Terry Francona said.

Francona and Cash go way back.

Cash played in Boston for Francona and spent two seasons as his bullpen coach in Cleveland before joining the Rays after the 2014 season. Cash recently invited Francona to join him in Denver for the All-Star Game.

On previous visits by the Rays, Francona has played pranks on Cash but not this time.

"I don't know where I saw it. But they came out with the 30 managers' career offensive numbers and Cashie was obviously last," Francona cracked. "But I was next-to-last, and that really bothered me. I'm like, `I'd better ease off the gas a little bit here, because that's not good company to keep.'"

Rays: All-Star C Mike Zunino (hip) wanted to play, but Cash insisted upon giving him another day's rest. Zunino will likely be back in the lineup Friday. ... Cash said an MRI taken on RHP J.P. Feyereisen (right shoulder discomfort) showed no structural damage. He's expected back in a few days.

Indians: Francona said RHP Aaron Civale (sprained finger) is expected to throw a bullpen in the next few days. Francona said Civale is still struggling to get full mobility in his finger. ... Reigning AL Cy Young Award winner Shane Bieber (shoulder) continues to throw from 60 to 80 feet as he moves along in his recovery, with no exact timetable to return.

Zach Plesac (5-3) starts for the Indians, who will either face one of Tampa Bay's relievers as an opener or Josh Fleming (7-5).