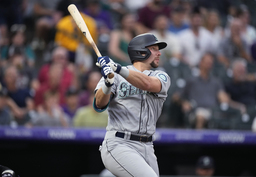 Gonzales (2-5) had not won since beating Baltimore on April 15. He'd been 0-4 in eight starts since then and also spent a month on the injured list with a strained left forearm.

"The objective was to give us a chance to win the game and that's exactly what he did. He did his job," Seattle manager Scott Servais said. "Nice to get Marco that win and really happy with the way he threw the ball."

Gonzales was on the paternity list to be with his wife, Monica, who gave birth to the couple's first child, daughter Grace, on June 28. Becoming a father helped change his view on his winless drought.

"I had a baby and that put life into perspective," he said. "There's a lot of bigger things than wins and losses. It's hard to get disappointed when you come home to a newborn."

Gonzales allowed two runs in five innings and posted the victory 65 miles from where he grew up in Fort Collins. He got the better of All-Star German Marquez, who lost at Coors Field for the first time since May 4.

Connor Joe put Colorado ahead 2-0 with his first major league homer, a two-run drive in the fifth. But the normally sharp Marquez couldn't hold it in the sixth while giving up four runs in his first start since throwing one shutout inning in the All-Star Game on July 13.

"We were all fired up for Connor. He's been swinging the bat really well in the minor leagues and he's continued to stay hot," bench coach/acting manager Mike Redmond said. "That's the beauty of this game, guys get opportunities and take advantage of it. It was a huge lift for us, we just weren't able to hold them down tonight."

The Mariners started the inning with four straight hits, the last being Cal Raleigh's two-run double that tied the game. Moore put them ahead with a two-out, two-run homer.

Marquez permitted four runs and seven hits in six innings. In his five previous starts combined, he had given up three runs.

Ty France hit a two-run double in the seventh for a 6-2 lead. C.J. Cron brought the Colorado closer with his 14th homer, a two-run drive in the eighth.

Kendall Graveman worked around a walk in the ninth to pick up his ninth save.

Mariners: 1B Evan White will have surgery on his right hip to repair the labrum in the joint, manager Scott Servais said. White will rehab at Seattle's spring training site in Arizona. ... LHP Justus Sheffield (left forearm strain) has started to throw but not off a mound. ... RHP Justin Dunn (right shoulder inflammation) will start throwing off a mound in the next week, Servais said.

Rockies: Placed INF/OF Chris Owings on the 10-day injured list with a mallet finger of the left thumb and recalled Joe from Triple-A Albuquerque. ... OF Raimel Tapia remained was not in the lineup for the fourth straight game. He pinch-hit for the second time since the All-Star break, walking in the ninth.

Raleigh entered Tuesday 0 for 12 but finally got his first career hit with a bloop single to center in the fourth inning. Raleigh, who made his major league debut July 11, kept it up with his two-run double in his next at-bat.

"I'd be lying if I told you it wasn't on my mind, but I knew it was going to come," Raleigh said of his first hit. "I had hit some balls hard and they didn't find the hole. Luckily I got one to drop in there."

The rookie catcher also threw out Garrett Hampson at second on a steal attempt in the first inning.

The Rockies are expected to activate LHP Austin Gomber (6-5, 3.86) from the 10-day injured list to make his first start since June 19 on Wednesday. The Mariners have not announced a starter.