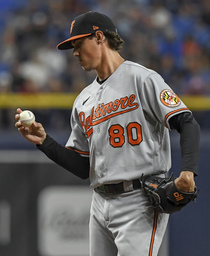 ST. PETERSBURG, Fla. (AP) Rookie right-hander Spenser Watkins gave up one run in six innings as the Baltimore Orioles tied a season high with their third consecutive win, 6-1 over the Tampa Bay Rays on Monday night.

"That's what I've dreamed my entire career, is be able to have success in the big leagues," Watkins said. "To be able to do that three times in a row is incredible. It just pushes me to continue to keep getting better, keep working. Complacency is not an option for me. It's been an incredible ride so far."

Watkins (2-0) was signed as a minor league free agent in February after not pitching in 2020 and spending 2014-19 in the Detroit organization. He had considered taking a high school freshman team coaching job in Arizona before signing with Baltimore.

"Great story," Orioles manager Brandon Hyde said. "He's pitching with confidence. He's not going to be overpowering. Able to work in and out, change speeds - so he's pitching. Back to the old-school art of pitching instead of trying to blow the ball by everybody at the top of the zone. It's fun to watch."

It's the fifth three-game winning streak for the Orioles, who have an AL-worst record of 31-62.

Cole Sulser, Paul Fry and Tyler Wells completed the five-hitter. Baltimore entered 0-6 against the Rays this season, getting outscored 48-21.

"I'm feeling pretty confident it's not going to be much time." Zunino said. "See how I bounce back in the morning."

Ryan Mountcastle flared an RBI double down the right field line and Anthony Santander hit a sacrifice fly as the Orioles took a 2-0 lead in the first.

Pat Valaika had a two-out, two-run single during a four-run sixth that made it 6-0.

Kelvin Gutierrez drove in a run on a single off Ryan Yarbrough (6-4), and Austin Hays added an RBI double against Matt Wisler. Santander started the inning by drawing a walk to cap a 12-pitch plate appearance.

Randy Arozarena had a run-scoring double in the sixth for the Rays. He was shaken up on an awkward slide when his face struck the bag during a failed attempt to steal second, ending the fourth.

Yarbrough allowed six runs and eight hits over 5 2/3 innings. He was 5-0 in his previous 12 outings dating to April 30.

Tampa Bay entered with an AL-best bullpen ERA of 3.23, and reinforcements are coming.

Rays: Tampa Bay ace Tyler Glasnow (right elbow) is playing catch but there is no date for a bullpen session. "He's in a really good spot," manager Kevin Cash said. "I know it's 75, 90 feet, but it's still Glasnow and there's reason to be excited." . LHP Brendan McKay (shoulder surgery) is scheduled to pitch Tuesday in a Florida Complex League game.

Rays: LHP Shane McClanahan (3-3), born in Baltimore, will face the Orioles for the first time. He had a Cal Ripken growth poster on his wall growing up.

"Cal is the reason I love the game," McClanahan said.