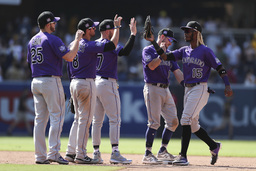 SAN DIEGO (AP) There haven't been a lot of big moments for the Colorado Rockies to celebrate this season.

On Sunday, there were two.

Minutes after the Rockies won Bud Black's 2,000th career game as a manager, Charlie Blackmon draped the purple MVP chain around his skipper's neck. The 3-1 win over Black's former team, the San Diego Padres, also clinched the first road series of the season for the lowly Rockies.

Pinch-hitter Chris Owings hit a go-ahead home run in the seventh inning and Jon Gray had another strong start for the Rockies, who took two of three and have won five of six overall against the Padres, including a three-game sweep at Coors Field June 14-16.

"Today was an example of players playing hard," Black said. "Jon Gray pitched great, a couple of big swings from a couple of veteran players, which is good to see; proud of the group the way we're battling. I'll remember this one. I will."

The Rockies, who've been buried in fourth place in the NL West since late May, came in just 8-34 away from Coors Field. It took them until just before the All-Star break to finally win a road series.

"Well, our road record is what it is," Black said. "It's not very good. We're frustrated by that. We're trying to find some answers to turn it around. We're playing against a good team. They were putting it out there. We went toe-to-toe with them and we won two of three. The guys are playing hard and they're trying to do the right things, and I appreciate that."

Owings' homer off Craig Stammen (3-2) made a winner of Gray (6-6), who has pitched well in four starts since a stint on the injured list with a right flexor strain. Gray held the Padres to one run and three hits in six innings, struck out seven and walked three.

Jhoulys Chacin pitched two perfect innings and Daniel Bard pitched the ninth for his fourth straight save and 14th overall.

Gray didn't allow a hit after the second inning. He loaded the bases on a two straight singles and a walk opening the second but the Padres got only one run out of it, when Victor Caratini grounded into a double play.

"It was exactly what we needed, really," Gray said. "We've been looking for road wins, especially series, all year long, and they've been hard to come by so it was nice to do it here in San Diego and everything worked out perfectly. It was a really good day for us."

Owings homered with one out in the seventh, his first. C.J. Cron homered off Chris Paddack in the fourth, his 12th, to tie the game at 1. The Rockies added an unearned run in the ninth, when All-Star infielders Manny Machado and Jake Cronenworth each committed an error.

"To go where we want to go, this is unacceptable," said manager Jayce Tingler, whose Padres won a wild-card series against the St. Louis Cardinals last year before being swept in the NL Division Series by the eventual World Series champion Los Angeles Dodgers.

The Padres, who've been in third place since June 9 and lost seven of 11, lost rookie left-hander Ryan Weathers to an apparent knee injury in the third inning. Weathers fielded Gray's sacrifice bunt and ran over to tag him, but landed awkwardly on his right leg and fell to the ground in pain, clutching at his right knee. After a few moments on the ground, he had to be helped off the field.

The ball popped loose on the tag attempt, putting runners on first and second with no outs, but the Rockies failed to score.

Tingler said afterward that Weathers was still having tests.

The Padres head into the break with four of their six starters injured. The only healthy starters are Chris Paddack, who pitched two innings Sunday, and Joe Musgrove.

All-Star Yu Darvish went on the 10-day injured list Sunday with left hip inflammation, retroactive to Friday. He came out of his start on Thursday night after just three innings, and the Padres said the next day that he wouldn't pitch in the All-Star game. Left-hander Blake Snell went on the IL on Friday with gastroenteritis, retroactive to Tuesday. Right-hander Dinelson Lamet has been on the IL since June 27 with right forearm inflammation.

The Padres haven't set a timetable for Lamet, who began the season on the IL and has been on it twice since, the first time with a UCL sprain and the second time with forearm inflammation.

"I feel good knowing that Bud's back there making most of the decisions," Gray said. "He's been a pitcher before. He can see what we're reacting to in the game and he knows what's going on. It's nice having that. You don't have to explain things. Bud's right there with you. He's on the same page."

Padres: Open a three-game series at Washington on Friday night.