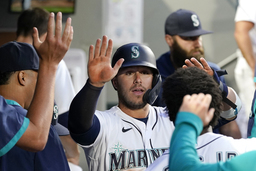 David Fletcher of the Angels extended his hitting streak to 23 games.

Flexen (8-3), signed out of the Korea Baseball Organization following last season, struck out six. He improved to 6-2 in 10 starts at home as the Mariners won their third straight game.

"He's a great man on the mound," Torrens said of Flexen. "He's the man of the moment right now."

Flexen had multiple suitors in the U.S. in the offseason and even considered staying in Korea. Midway through the season, he's now Seattle's top starter.

"I 100% made the right decision," Flexen said. "I love being here. I love this organization."

Drew Steckenrider struck out the side in the eighth and Paul Sewald got Shohei Ohtani to strike out swinging on the way to his second save and a combined three-hitter.

Torrens tripled off Patrick Sandoval (2-3) with two outs in the sixth for a 2-0 lead. He was also instrumental in the fourth inning when he moved Mitch Haniger from first to third with a single, setting up Jake Fraley's RBI grounder.

Torrens has eight hits, two home runs, six RBIs and his only two career triples during Seattle's current eight-game homestand. He's also drawn a walk in six straight games, something no other Mariners player has done since 2015.

Torrens credits his recent surge on "my mentality," he said. "I'm starting to believe in myself and I've started to give all my effort when I'm playing."

Sandoval struck out six and gave up six hits over seven innings, but got no run support. In his last two games against the Mariners, he has struck out 16 over 13 innings, but is 0-2.

"I think Sandoval was outstanding," Angels manager Joe Maddon said. "That may have been his all-time high for pitches and innings thrown. I think it was important to stretch him out mentally more than physically."

Fletcher singled in the fourth inning to move into a tie with Garret Anderson and Jim Edmonds for the third-longest Angels hitting streak. He needs hits in two more consecutive games to tie Rod Carew for second.

Fletcher fielded Ty France's ground ball by second base in the sixth and made the forceout on Mitch Haniger, then got wiped out by shortstop Jose Iglesias as he made the pivot to first. He was checked by trainers for an apparent leg injury, but stayed in the game.

Angels manager Joe Maddon said he hasn't set the post-break pitching rotation. He does know now what role dual star Ohtani will play in the All-Star game, "but I'm not permitted to tell you." Maddon did say he thinks Ohtani's role in the second half will be very similar to the first half with one caveat: "I also believe we might want to be more vigilant with hitting and pitching on the same day. . The conversations will occur."

Mariners: 3B Kyle Seager (right shin) was a late scratch with a bone bruise he got in a collision on Thursday night against the Yankees. He played Friday, but trainers were unable to reduce the swelling for Saturday's game. He's day-to-day and might not go on the injury list due to the All-Star break. "It was one of the worst ones I've ever seen," Servais said. "... It's like a bruised banana. It's bad."

RHP Casey Sadler threw live to hitters before Saturday's game in the next step of his recovery from a shoulder injury. Sadler has been on the injured list since May 2. "From what I understand he felt good coming out of that, so he'll continue to build upon that as he gets closer to rejoining our bullpen," manager Scott Servais said. Sadler was 0-1 with a 1.64 ERA in 11 games before landing on the injured list.

Angels: LHP Jose Suarez (3-2, 2.37) makes his second start of the season in 11 appearances. He lost on Monday in his first start after giving up two earned runs in three innings.

Mariners: LHP Hector Santiago (1-1, 3.38) will get the start while his 10-game suspension for tampering is under appeal. The bullpen start is necessary due to injury to regular starter Justus Sheffield (left forearm strain).