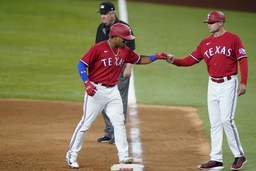 The only Rangers hitters to reach base in the first five innings against Irvin (6-8) were two hit batters in the fourth inning. Eli White led off the sixth with a grounder deep in the hole at shortstop, and the speedy White beat out the throw from Elvis Andrus, who played his 12 previous major league seasons with Texas.

White was the first of six straight Rangers batters to reach. The first four came against Irvin, ending with Andy Ibanez's RBI single to center to halt the shutout bid. Garcia greeted reliever Sergio Romo with his single giving the Rangers the lead. Texas won hitting only five singles.

Garcia, headed to the All-Star Game, leads Texas with 61 RBIs, the most for a Rangers rookie before the All-Star break.

"There's multiple adjustments that the league will make, and I think I've seen probably two or three at least that they've made with Adolis," Rangers manager Chris Woodward said. "And he's made adjustments every time."

Ian Kennedy pitched a perfect ninth inning to earn his 15th save in 16 opportunities for the Rangers, who have won eight of their last 13 games.

Irvin gave up all three runs and three hits with three hit batters, striking out five and walking none.

"It looked like he got tired pretty quickly," A's manager Bob Melvin said of Irvin.

"I wouldn't say I was gassed," he said. "It came down to execution. I let that one get away from us. That one's on me."

Lyles (5-5) allowed both runs and seven hits in six innings, striking out three and walking one. His third straight win after winning two of his first 14 starts this season. He pitched with an extra day's rest after throwing a career-high 124 pitches at Seattle last Saturday, when he worked six innings and earned a 7-3 win.

"I don't think anything came from the last outing," Lyles said. "Not every outing you're going to have your good stuff, your A stuff, but we managed."

Sean Murphy gave Oakland a 1-0 lead in the fourth with a bases-loaded, broken-bat groundout to third base that scored Andrus. The A's made it 2-0 in the sixth on Jed Lowrie's RBI single to score Matt Chapman from second. Chapman was initially called out at second trying to stretch a single to left center, but the call was reversed following video review.

IT WAS HIGH, IT WAS FAR

White's fly ball pulled near the top of the left-field foul pole with one out in the third inning, initially ruled a home run by third base umpire Bruce Dreckman, was reversed to a foul ball following an umpire conference.

Chapman extended his on-base streak to 24 games, starting on June 11. . Six of Oakland's last seven games have been one-run games.

Rangers: Rookie LHP John King (shoulder inflammation) was put on the 10-day injured list retroactive to Wednesday. OF Jason Martin was recalled from Triple-A Round Rock.

Rangers RHP Mike Foltynewicz (2-8, 5.17) is fourth highest among American League qualifiers in opponents' batting average at .274 despite holding batters to a .192 average in his last three starts.