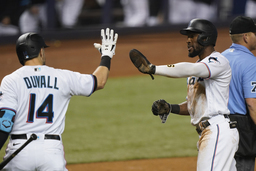 MIAMI (AP) Jorge Alfaro hit a tiebreaking homer in the eighth inning, and the Miami Marlins ended the Los Angeles Dodgers' nine-game winning streak with a 5-4 victory on Monday night.

Alfaro, who was 2-for-31 in his previous nine games, drove a slider from Dodgers reliever Victor Gonzalez (3-1) to center field for his third homer of the season.

"Whenever I step in the box, I'm looking for a pitch I can drive to the middle," Alfaro said. "That was it. I wasn't looking for a specific pitch. I just tried to get on base for my teammates."

All-Stars Mookie Betts and Max Muncy and 2019 NL MVP Cody Bellinger were not in the Dodgers' starting lineup, but all three pinch-hit in the eighth, when LA scored twice to tie it 4-4.

Miami reliever Zach Pop allowed Albert Pujols' leadoff single and then walked Will Smith and Muncy. David Hess (1-0) walked Gavin Lux to force in a run and allowed Bellinger's game-tying sacrifice fly. In his Marlins debut, Hess kept it tied, walking Betts before he retired Chris Taylor on a flyball to right and struck out A.J. Pollock.

Anthony Bender pitched a scoreless ninth for his first major league save.

"It feels good, it hasn't really settled down yet but I feel good," Bender said. "Really didn't have any different mindset. I went up there and tried to get three outs."

Jazz Chisholm made it 4-2 with a single in the fourth.

Dodgers starter Walker Buehler led off the third with a double off Trevor Rogers and scored on Chris Taylor's double. Justin Turner's single drove in Taylor.

"We definitely had a lot of opportunities to win that game," Taylor said. "Not our best baseball tonight but hopefully tomorrow we can start fresh and start a new winning streak."

Rogers was lifted after five innings. In his first start since being named an All-Star, he allowed two runs on six hits and struck out eight.

"I thought we took good at bats against their ace, chased him and had a chance in the 'pen," Dodgers manager Dave Roberts said. "Had opportunities late to take the lead and win a baseball game but they made pitches when they needed to."

Buehler allowed four runs on five hits and struck out six in five innings. The right-hander walked two and hit a batter.

Starling Marte and Cooper each stole bases in the third inning, and both scored.

"We've got a few guys that can run," Miami manager Don Mattingly said. "We've taken advantage of some counts. It's the style we want to play and have the guys that can do it."

Capacity restrictions at LoanDepot Park were lifted for the first time since before the COVID-19 pandemic, although plenty of good seats were still available. The opener of the four-game series attracted 15,290 fans.

The Dodgers activated LHP Scott Alexander from the 60-day injured list and optioned LHP Garrett Cleavinger to Triple-A Oklahoma City. Alexander, who had been sidelined since May 3 because of left shoulder inflammation, pitched a scoreless sixth Monday.

Marlins: RHP Sixto Sanchez will undergo arthroscopic surgery and won't pitch this season after an MRI revealed a small tear in the posterior capsule of his throwing shoulder. Expected to be one of the mainstays in the club's rotation, Sanchez has been sidelined all year because of shoulder soreness.

Dodgers: RHP Tony Gonsolin (1-0, 2.81) will start the second game of the series Tuesday.

Marlins: RHP Pablo Lopez (4-5, 2.97) gets moved up a day after his previous start lasted only one pitch. Lopez was ejected when his first pitch of the game hit Atlanta's Ronald Acuna Jr. on July 2.