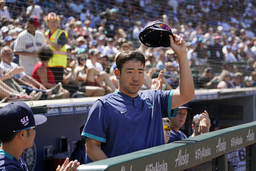 SEATTLE (AP) While it's Yusei Kikuchi heading to the All-Star Game, no member of the Seattle Mariners' starting rotation has provided a bigger boost this season than Chris Flexen.

And when Flexen is pitching in his home park, good luck solving the tall right-hander.

"You know he's going to give you a chance to win the game, is going to keep you in the ballgame," Seattle manager Scott Servais said. "I'm really impressed with how he continues to develop."

Flexen added to his impressive first season in Seattle by allowing one run in six innings, Luis Torrens homered for the seventh time in his past 13 games and the Mariners beat the Texas Rangers 4-1 on Sunday.

Seattle extended its recent surge, winning its fifth straight series of longer than two games, and has won 11 of 15 overall.

Flexen (7-3) spent last year pitching in South Korea and has carried that success back to the majors for the first half of the season. Pitching on four days' rest for the first time this year, Flexen struck out five and got the run support he needed from a pair of long balls.

Flexen has a 1.99 ERA in nine starts this season at home. He beat the Rangers for the third time.

"I just continue to learn to trust myself and trust the guy behind the plate," Flexen said. "Today it was Luis, the last few starts have been with (Tom Murphy) and those guys have been phenomenal. And definitely trusting the guys play defense behind me as well - that keeps me on the aggressive side, throw my stuff in the zone and try to force contact and let the guys work."

Torrens was demoted to the minors in May but has been on a tear hitting homers since returning in mid-June. He lined a 1-2 pitch from starter Mike Foltynewicz over the wall in right field for a three-run shot with two outs in the fourth inning. Foltynewicz dropped to a knee on the mound after missing his spot with a 95 mph fastball.

Shed Long Jr. added a solo homer an inning later for Seattle. Foltynewicz (2-8) allowed only four hits over seven innings, but has given up 21 homers - the most in the majors.

"The Torrens pitch, I felt like that was the one mistake he couldn't make to that hitter," Texas manager Chris Woodward said. "He had other pitches to go to or just execute the pitch he was trying to make, but not to give up a homer there. It doesn't always come down to one pitch. Seemed like today did. In his case I thought he threw the ball well."

The only run Flexen permitted came on a ball hit all of 54 feet. Adolis Garcia reached on a slow chopper with two outs in the sixth inning that allowed Eli White to score from third.

Three of the four hits Flexen gave up came in the sixth inning, but he escaped the jam by striking out Joey Gallo on a changeup to end his outing.

"I just had the confidence to throw it 3-2 and was able to execute it," Flexen said.

Kendall Graveman pitched the ninth for his eighth save.

The Texas trio of Garcia, Gallo and right-hander Kyle Gibson, and Seattle's Kikuchi were named to the All-Star team on Sunday.

Gibson leads the American League with a 1.98 ERA, while Gallo and Garcia both have 20 homers to carry the Texas offense.

"I got choked up a little bit," Gibson said. "When it actually happens and the thoughts and the anticipation that has kind of built up over the last few weeks actually kind of happens, it takes hold of you a little bit."

Kikuchi is 6-3 with a 3.18 ERA in 15 starts for Seattle this season. He has 11 quality starts, the most of any lefty in the American League.

Kikuchi is the 14th Japanese-born player selected to the All-Star Game and the fifth from the Mariners, joining pitchers Kazuhiro Sasaki, Hisashi Iwakuma and Shigetoshi Hasegawa, and outfielder Ichiro Suzuki.

"I just feel really thankful for my teammates, coaches, just everyone being there for me and my family, just always supporting me through the ups and downs, especially my first two years here," Kikuchi said through a translator.

Rangers: LHP Kolby Allard (2-4, 3.46 ERA) starts Monday night as Texas opens a three-game series at home against Detroit. Allard will be making his seventh start after moving from the bullpen to the rotation in late May. He's 1-4 with a 3.66 ERA in six starts to date.

Mariners: Following an off day, Seattle begins a three-game series Tuesday with the New York Yankees. LHP Justus Sheffield (5-7, 5.88 ERA) will start the opener against the franchise he debuted with in 2018.