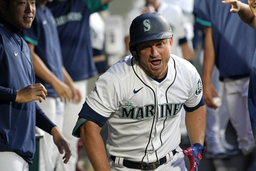 SEATTLE (AP) John Hicks homered in his first two at-bats, Eli White added a three-run shot and the Texas Rangers snapped a 13-game losing streak in Seattle with a 7-3 victory over the Mariners on Saturday night.

Texas won in Seattle for the first time since July 23, 2019, and ended the longest active losing streak in an opponents' park in the majors.

Hicks was the catalyst with his second career multi-homer game. A former prospect in the Mariners organization, he led off the third and fourth innings with home runs as part of a miserable return to the mound for Seattle starter Marco Gonzales, who was pitching for the first time since June 20 following the birth of his first child.

Hicks homered in his first appearance in the majors in nearly two years on Thursday at Oakland after being called up from Triple-A Round Rock.

"It's hard to put into words kind of everything that's happened in the last few days, but obviously it's pretty awesome," Hicks said.

Hicks' first long ball was the start of a four-run inning capped by White's line-drive homer that barely cleared the wall in left field for his fourth of the season.

Hicks opened the fourth with another towering drive that hugged the foul line but stayed fair and was the start of a three-run inning. Mitch Haniger had his second straight game with an error on a ball that should have been caught, and Adolis Garcia's double scored two more for the Rangers to end Gonzales' night.

"I felt like a little bit of the rust set in in the third and couldn't quite get back on track," Gonzales said. "It's not how I saw my first start as a dad going."

His only bad inning came in the third when Seattle loaded the bases with no outs and Ty France walked to force in a run. But the Mariners' rally died as Lyles got a shallow fly ball, a strikeout and a deep flyout to end the threat.

"I'm thankful that (manager Chris Woodward) allowed me the chance to get out there and get, get the sixth inning. That was fun," Lyles said.

Gonzales (1-5) missed his last turn in the rotation due to the birth of his daughter. His command was an issue from the outset and when he missed it was generally in the middle of the plate.

It was the first time Gonzales failed to get through four innings since May 1, 2019, when he lasted 1 2/3 innings in a loss to the Chicago Cubs.

"He'll get it going. Got a ton of confidence in him and the competitor he is," Seattle manager Scott Servais said. "He just made some mistakes tonight on the inner part of the plate that were down and they jumped on them."

Texas RHP Dennis Santana was recalled from Triple-A Round Rock and LHP Wes Benjamin was optioned to clear the roster spot. Santana appeared in 16 games this season for the Los Angeles Dodgers but was traded to Texas on June 17. He pitched one inning of relief on Saturday with one strikeout.

Benjamin appeared in seven games with the Rangers and was 0-2 with an 8.10 ERA.

Mariners: RHP Chris Flexen (6-3, 3.97) will make his 15th start. Flexen lasted five innings and allowed three runs in his last start against Toronto. At home, Flexen is 4-2 with a 2.05 ERA in eight starts this season.