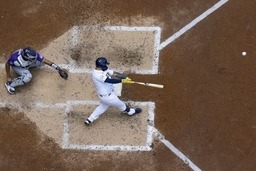 MILWAUKEE (AP) Keston Hiura homered, doubled and drove in three runs to back a sharp performance by Eric Lauer, and the Milwaukee Brewers beat the Colorado Rockies 5-0 on Sunday for their fifth consecutive victory.

Lauer (2-3) struck out six over six innings of two-hit ball. After the Rockies loaded the bases with two outs in the second, Lauer retired 13 of his last 14 batters.

"To be able to escape that inning and then really just kind of get on myself a little bit more, like, `Hey, you need to lock it in a little bit better,' it's the push that I needed, I think," Lauer said.

Omar Narvaez also went deep as the NL Central-leading Brewers completed a three-game sweep and improved to 26-9 in day games, the best mark in the majors. All three games in this weekend series had afternoon starts.

The Rockies have lost six of seven. They dropped to 6-31 away from Coors Field for the majors' worst road record.

Hiura went 2 for 4 while showing signs of breaking out of a prolonged slump. He was robbed of a third hit on a diving catch by right fielder Yonathan Daza.

Before the Rockies came to town, Hiura was batting .127 with one homer and five RBIs in 38 games. He matched that RBI total in this three-game series while going 4 for 11 with two homers.

"There's been some very hard contact, the damage to the baseball, which is what he's definitely capable of doing," Brewers manager Craig Counsell said.

Hiura hit a solo homer and a game-winning sacrifice fly on Friday as the Brewers rallied from a four-run deficit to beat the Rockies 5-4 in 11 innings.

In the third inning Sunday, Hiura drove a 1-2 pitch from Chi Chi Gonzalez (2-5) over the wall in left-center. Hiura's homer traveled an estimated 423 feet.

That was it for the Brewers against Gonzalez, who struck out four and walked two while allowing three hits over five innings.

"He kept us in the game through five, and we just couldn't score for him," Rockies manager Bud Black said.

The Brewers added to their lead once Gonzalez left the game.

After Luis Urias singled to lead off the sixth, Narvaez sent a 3-2 pitch from Lucas Gilbreath over the wall in right-center. Hiura brought home two runs with a two-out double off Justin Lawrence later in the inning.

Gilbreath faced only three batters, and each of them scored. Colorado's bullpen has a 6.51 ERA over its last 10 games.

Brewers 2B Kolten Wong was out of the lineup after leaving Saturday's game early with tightness in his left calf. Counsell said it was doubtful that Wong would be in the starting lineup for Monday's game with the Chicago Cubs. Counsell said Wong could return at some point during that three-game series.

The Rockies recalled right-hander Antonio Santos from Triple-A Albuquerque and optioned left-hander Ben Bowden to Albuquerque. Bowden had a 1-2 record and 7.94 ERA in 21 appearances.